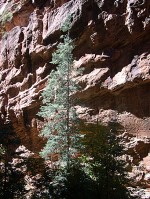 The beauty and grandeur of Zion National Park is many faceted and has a wide appeal. Hikers can enjoy the scenic views, geologists the rock formations, and plant lovers a large and rich flora. Part I of this post considers the herbaceous wildflowers and Part II the shrubs, trees and some other interesting aspects of this wonderful place.

The geologic processes that have been going on throughout time have produced different habitats in Zion by creating variations in soils, water availability, and elevations. Each habitat has its own distinct environmental conditions and plant life that has adapted to those conditions. Here are some of the interesting plants (and animals) you might see in the park in September.

On the canyon floor away from streams, desert like conditions exist. In sandy areas cryptobiotic soil can be identified by its black crust. The soil is associated with a unique community of cyanobacteria, mosses, and lichen; the organisms and their by products create a crust of soil particles that are bound together by organic materials. 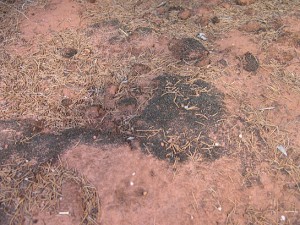 One of the most ubiquitous plants on the canyon floor is Rabbitbrush (Chrysothamnus nauseosus), that is one of the first to move into a disturbed area and lives happily along roadsides and around campgrounds. It’s silver-gray foliage is aromatic, although its odor is not pleasing to humans. The plant produces rubbery latex from which rubber can be made. The Paiute Indians chewed the bark and wood like chewing gum. Sheep and wildlife graze on it. 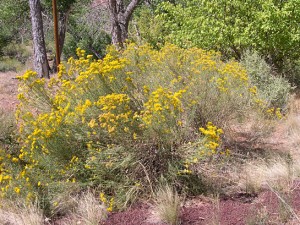 In fall the bushes are covered with bright yellow flowers that are attractive to bees, wasps and butterflies. 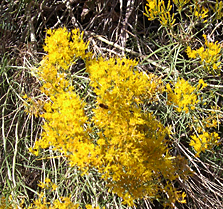 Another attractive shrub on the canyon floor around the campsites and visitors center is sand sagebrush (Artemesia filifolia). Its tiny cream flowers are produced in graceful whisps with its grayish silver foliage. 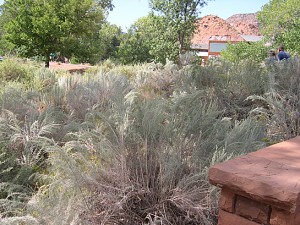 Four winged salt bush (Atriplex canescens) gets its name in part because it is able to live in salty soils. It does this by excreting excess salt into tiny leaf hairs that die from the high salt concentration and leave behind a deposit of salt crystals. Cattle, sheep and wildlife eat the leaves and stems. Plants are either male or female but female plants can change genders to conserve energy for reproduction. The female plants produce their seed in fruits that are enclosed by paired wing like bracts, adding ‘fourwinged’ to the name of the bush. 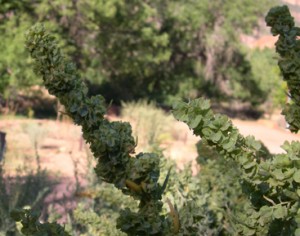 Mule deer are frequent visitors to the campsites on the canyon floor. This lone female stayed quite a while as she browsed on the sunflowers (Helianthus annuus) that grew in the area. 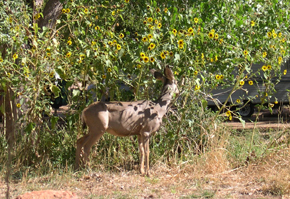 A different kind of plant community grows in wet areas and on river and stream banks. This community is dominated by cottonwood (Populus fremontii) box elder (Acer negundo), and velvet ash (Fraximus velutina). The Fremont cottonwood is famous for its fall coloration which was just starting to appear. Box elder produces clusters of fruit in racemes in fall. Pioneers used to tap the trees in spring for the sweet juice that they reduced by boiling. Velvet ash is beautiful but it causes hay fever in the spring. In a sandy area along a stream this male tarantula makes his way probably looking for a female. Tarantualas are nocturnal and live in underground nests. The females remain in their homes while the males look for mates in spring and fall. In spite of Hollywood’s portrayal of them, they are NOT poisonous. They are docile creatures and will not hurt you unless you threaten them. 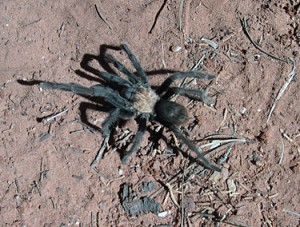 On sunny slopes between 3,600-5,500’ in elevation pinion pine (Pinus edulus) and Utah juniper (Juniperus osteosperma) dominate. The nuts of pinion pine are edible and are used in candies, cakes, and cookies. They were a staple food of American Indians. Pinion pine usually bears its needles in twos. The needles were steeped by Indians to make tea. Utah juniper is able to survive extremely harsh conditions and can live as long as 700 years. Juniper berries are actually fleshy cones and are coated with a waxy cover that protects them from drought. Wild turkeys, rock squirrels and other wildlife eat them. The bark of the trees is shaggy and the Indians used it for bedding, sandals, mats, baskets, and thatch. Another interesting shrub on this steep, rocky, talus slopes is live oak (Quercus turbinella). It is a low growing shrub and has evergreen, leathery dark green leaves that are prickly and resemble those of holly. It produces long slender acorns that can be eaten if the tannin is removed by repeated grinding and soaking.  An astringent can be made from the galls made on the stems of the shrub by gall wasps. At higher elevations Ponderosa pine, aspen (Populus tremuloides), and white fir (Abies concolor) dominate. While eating lunch on a rock outcrop in this community a bold chipmunk came to visit. The Park authorities warn hikers not to feed the wildlife but apparently hikers ignore their warnings. This is not a good situation as the wildlife can become quite aggressive and unintentionally bite the hand that feeds them. The reds and bright gold of the fall foliage is just beginning to show on some of the trees and the climax is still weeks away, but Zion is beautiful as fall settles upon it.