Butterflies in the Garden and How to Attract Them: Giant Swallowtail (Papilio cresphontes)

With a wing span of up to 6.3 inches the giant swallowtail is one of the largest butterflies in North America. It is found from southern Canada east of the Rocky Mountains, south to Florida, southwestern United States, Mexico, and Central and South America. The butterflies inhabit sunny, open areas, forest edges, roadways, river courses, and citrus groves. The dorsal sides of the wings are dark brownish black with two broad bands running diagonally across from the wing tips to the middle of the body. The spoon shaped tails have a yellow center that distinguish the giant swallowtail from Schaus’ swallowtail (Papilio aristodemus) that has all black tails. The ventral side of the wings is yellow with black venation. Males and females are hard to distinguish from each other but females tend to have a slightly larger wing span. 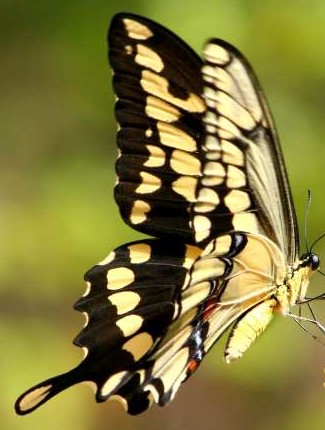 Male giant swallowtails patrol for females in the afternoon with a long gliding flight, defending their territory if necessary. After mating the females deposit their caramel colored eggs singly usually on the upper side of host plant leaves. The caterpillars resemble bird droppings and are brown or olive with dirty tan patches and red scent 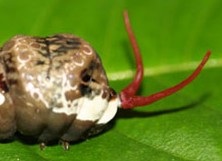 horns when they are mature. They are often called “Orange Dogs” by citrus growers who often consider them a serious pest. After feeding the caterpillars pupate, forming a mottled gray-brown chrysalis.