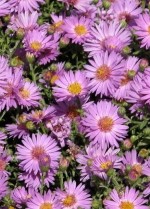 The traditional cottage gardener had plants that bloomed in the fall just as we do. Many of those plants are still favorites today although improved cultivars are taking their place. Some of the cottagers favorites are not available anymore while others can be found with careful searches of nurseries as well as on-line sources. Of course, the casual “look” of the fall blooming garden can be obtained by careful substitution of modern varieties.

Here are five favorite fall blooming plants that could have been found in a typical cottage garden of the past.

Mums were popular in cottage gardens of the past just as they are now. ‘Cottage Pink’ and ‘Cottage Bronze’ are two of the most popular from times past. Both have double flowers and are tall so they occupied the back of the border where they could find some support from their neighbors. ‘Innocent’, a pale pink single flowered cultivar was popular for its very late blooming. ‘Anastasia’ is a magenta pink pompom that is still around.

The species Sedum spectabile has flat pink heads and succulent foliage and looks good all season long. The modern cultivars that seem to be popular and available in most parts of the country are ‘Autumn Joy’ and ‘Meteor’.

Formerly placed in the genus Harpalium, the perennial sunflower is now in the genus Helianthus that includes a number of large semi-double, bright yellow flowers. One of the best is ‘Miss Mellish’, a large-flowered cultivar about 6’ tall.

More commonly known as New York aster to American garden, Michaelmas daisy has long been a favorite in Britain and no cottage garden would have been without some. One of the best is ‘Climax’, a cultivar with straight stiff stems, and evenly spaced flowers. ‘St. Egwyn’ has very small pink flowers. Aster tradescantii is a very old American species that blooms later than most Michaelmas daisies and has centers that stay bright yellow until the end, unlike other asters whose centers turn brown before the petals fade.

The simple, white form of Japanese anemone carry the botanical name Anemone hupehensis and are tough plants once established. They resent being moved but once they decide they like their location, watch out; they can take over. Modern hybrids have been developed that include lovely pink and rose cultivars, as well as some attractive white ones similar to the species, like ‘Honorine Joubert’. 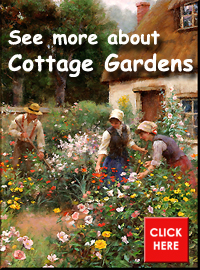 Many of the old cultivars mentioned are difficult or impossible to find especially in the US but the same or a similar look can be had by choosing modern cultivars that share the appealing characteristics of the difficult-to-find ones. In general, the old varieties had smaller flowers than their modern counterparts and often lacked disease resistance and other desirable features so using them can be a plus even if they aren’t exactly like the originals.