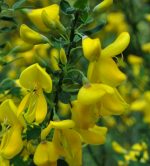 Scotch broom is a deciduous to evergreen, nitrogen-fixing shrub growing 4-8’ tall. It is native to dry, sandy soils in central and western Europe but was introduced into North America as an ornamental in the 1800s, has naturalized and become invasive in disturbed sites in California, Oregon, and Washington in the West and Maine to Alabama in the East. Its success is due to prolific seed production, long viability of seeds, green stems that allow photosynthesis all year around, and the nitrogen-fixing bacteria in its roots that enrich nutrient poor soils.   The trifoliate leaves are sparsely distributed on slender branches and have ½” long leaflets. The bright yellow flowers are fragrant, up to 1” long and give way to flattened, pea-like green pods up to 2” long. When the pods are mature they are brown to black and explosively eject their seeds. Several cultivars are available varying most significantly in flower color. USDA Hardiness Zones 5-8

The following natives are recommended as alternatives:

Tree Anemone (Carpenteria californica)
An evergreen shrub, tree anemone grows up to 6’ tall and has glossy green leaves with dense white hairs on the undersides, and fragrant white five petaled flowers 2-3” across appearing in late spring to summer. Plants are native to chaparral, riparian areas, woodlands and forests in California. USDA Hardiness Zones 8-10

Wild Lilacs (Ceanothus spp.)
Wild lilacs are endemic to North America where they are occur on dry, sunny hillsides from coastal scrub lands to open forest clearings and are common throughout the Rocky Mountains from British Columbia south through Colorado, the Cascades of Oregon and California, and the Coastal Ranges of California. They are usually evergreen, have large attractive clusters of tiny flowers in many colors, often with fragrance, and are an important food source for mule deer on the West Coast. USDA Hardiness Zones varies by species.

Mormon Teas (Ephedra spp.)
These unusual plants are low growing gymnosperm desert shrubs native from Wyoming to Oregon, south to Texas and California. Their leaves have been reduced to scales on green branchlets and cones are small but attractive. The plants are valued chiefly for their medicinal qualities. USDA Hardiness variable depending on the species

Parry’s Rabbitbrush (Ericameria parryii)
At least twelve varieties of rabbit brush have been identified but in general the plants are shrubs growing up to 40” tall with fuzzy branches and linear leaves that are smooth, hairy, or wooly. The flowerheads are made up of five to twenty disc flowers and appear singly or in clusters from late summer into fall. The plant is native to mountains and foothills from Saskatchewan, south to New Mexico and California. USDA Hardiness Zones variable depending on variety.

Flannel Bush (Fremontodendron californicaum)
Flannel bush is an evergreen shrub growing 6-20’ tall with fuzzy, flannel-like olive to gray-green leaves and yellow spring flowers up to 2.5 inches wide. It is native to the foothills of the Central Valley, the hills of the Central Coast, and San Francisco Bay area, and the mountains of the Transverse and Peninsular Ranges where it grows in sandy washes near seasonal creeks, or chalky well-drained mountain hillsides with ample rainfall. Cultivars are available that vary in color and height. Sunset Zones 4-24

Ocean Spray (Holodiscus discolor)
The foamy cascading terminal sprays of creamy white flowers from late spring into summer give this deciduous shrub its common name. Growing up to 7’ tall, it has small , broad, scalloped leaves and is native to dry woodlands, rock outcroppings, scree slopes and forest edges from Alberta and British Columbia, to Arizona and California. USDA Hardiness Zones 6-9

Waxflower (Jamesia americana)
Also known as cliffbush, waxflower is a rounded to mounded deciduous shrub growing up to 6’ wide and tall. It has flaking cinnamon-colored bark in the winter and bears terminal clusters of fragrant five-petaled, star-shaped, waxy white flowers in spring and bright green foliage that turns brilliant red, orange, and pink in the fall. It is native to mountains, canyons of pinyon, and juniper woodland in the mountains of Wyoming to California, south to New Mexico and Arizona. USDA Hardiness Zones 3-8

Antelope Brush (Purshia tridentate)
This semi-evergreen shrub grows up to 10’ tall and has slender three to five lobed grayish leaves and pale yellow flowers with five petals and darker yellow anthers from spring to summer. It is native to well drained soils of open woods, streambanks, rocky slopes, and pine forests from Alberta to British Columbia, south to New Mexico and California. USDA Hardiness Zones 4-9

Bayberry (Morella pensylvanica aka Myrica pensylvanica)
Bayberry is a rounded deciduous shrub growing 6-10’ tall and known for its aromatic leaves and fruits that are attractive to birds and have a waxy covering that is used to make candles, soaps, and sealing wax. It is native to dunes, swamps, marshes, bog margins, and roadsides from Newfoundland, south along the coast to North Carolina, west along the Saint Lawrence, and eastern Great Lakes to Ohio. USDA Hardiness Zones 4-7

Tree Lupine (Lupinus arboreus)
With spikes of fragrant bright yellow or occasionally blue pea-like flowers in spring, tree lupine is a nitrogen-fixing evergreen shrub and grows 5-7’ tall. It hasgreen to gray-green palmately compound leaves with five to twelve leaflets and is endemic to coastal bluffs and open woods in central California but has become an invasive species in Southern California and coastal Pacific Northwest. USDA Hardiness Zones 8-9

Beach Plum (Prunus maritima)
Growing to 6’ tall, beach plum is a deciduous suckering shrub with dull green leaves 2-3” long and .5” wide white flowers in spring that give rise to edible dull purple fruits in late summer. Plants are native to Northeastern US from Maine south to Maryland where they grow in sand dunes. USDA Hardiness Zones 3-7

Golden Currant (Ribes aureum)
This summer-deciduous shrub grows three to six feet tall and has green leaves that have three to five lobes and turn yellow or red in the fall. The star-shaped golden yellow flowers are produced in racemes and have a spicy scent with hints of cloves and vanilla. The ½” wide fruits are edible but tart. Plants are native to open woods, streambanks, desert washes, and pine flats from Saskatchewan to British Columbia, south to new mexico and California. USDA Hardiness Zones 4-8