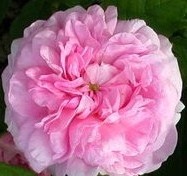 The Damask roses have a certain mystic. Is it the name that suggests an exotic origin? or the recollection of a heavy fragrance? Both are true of the Damask rose. It is believed to have come from the Middle East, perhaps brought to Europe from Syria by the crusader Robert de Brie in the mid 13th century. The flowers are famous for their fragrance and they are still commercially grown for use in perfume, rose oil, rose water, and to flavor food.

The Damask rose is actually a hybrid from Rosa gallica and Rosa moschata, and so botanically is known as Rosa x damascena. It was one of the first roses in Europe to bloom more than once and became a parent of other roses that we consider “old garden roses” such as Bourbon, hybrid perpetual, and Portland roses. Damask roses are divided into to groups: summer damasks that bloom only once and autumn damasks that bloom in summer and fall.

The major characteristics of commonly grown Damask roses are:

Flowering: Once in summer but some continue into fall.

Fragrance: Most have heavy sweet fragrance; some moderate.

Stem: Flowers borne in clusters of 3-15 on thorny stems; stems of some weak and plants need to be staked.

Disease Resistance: Variable, many resistant but some prone to mildew or blackspot.

Buying Damask roses is not as simple as going to your local nursery. Their large size, often lax form, and habit of blooming once are not in favor now and so demand for them is limited. Some nurseries that specialize in old garden roses may have a limited selection. Here are some that are highly rated by the American Rose Society and/or other authorities.

Not recommended but interesting is ‘York and Lancaster’ that recalls the War of the Roses in England. A white rose was the emblem of York, a red rose the emblem of Lancaster. This damask rose combines pink and white roses on the same bush, often in the same cluster.