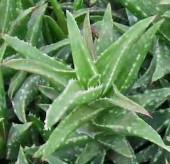 Aloes are succulents in the Asphodelaceae family that also includes daylily (Hemerocallis), red hot poker (Kniphofia), and foxtail lily (Eremurus) The genus includes over 500 species in that are native to tropical and southern Africa, Madagascar, Jordan, the Arabian Peninsula, and islands in the Indian Ocean. The plant is characterized by its rosette of long tapering fleshy pale green leaves that contain a mucilaginous sap used in modern time to sooth burns and the itch of poison ivy. The yellow-to orange red flowers are tubular, one inch long, and are carried on a terminal raceme on a leafless stalk. Plants like fertile, well-drained , slightly alkaline soil and full sun, but tolerate lean soil and some shade. They are hardy only in USDA zones 9- 10 but are commonly grown as a house plant

Shakespeare mentions Aloe in the sonnet, A Lover’s Complaint, st. 39. The poem is the lament of a young woman who has been abandon by her lover and includes a description of her seduction.

Love’s arms are peace, ‘gainst rule, ‘gainst sense,’gainst shame,
And sweetens, in the suffering pangs it bears,
The aloes of all forces, shocks, and fears.

Aloe was known in ancient times. In the time of Alexander the Great it was used to heal wounds, the ancient Greek historian Dioscorides in the first century AD believed it had been used since 2000 BC, while in the same century the ancient Romans, Juvenal and Pliny the Elder, mention the bitterness of the plant, as does Chaucer in Troilus and Cryseide, st. 159. In Shakespeare’s time, A. socotina, A. vulgaris, and other aloes were known as bitter purgatives. The name Aloe is taken from the Arabic name for the plant.