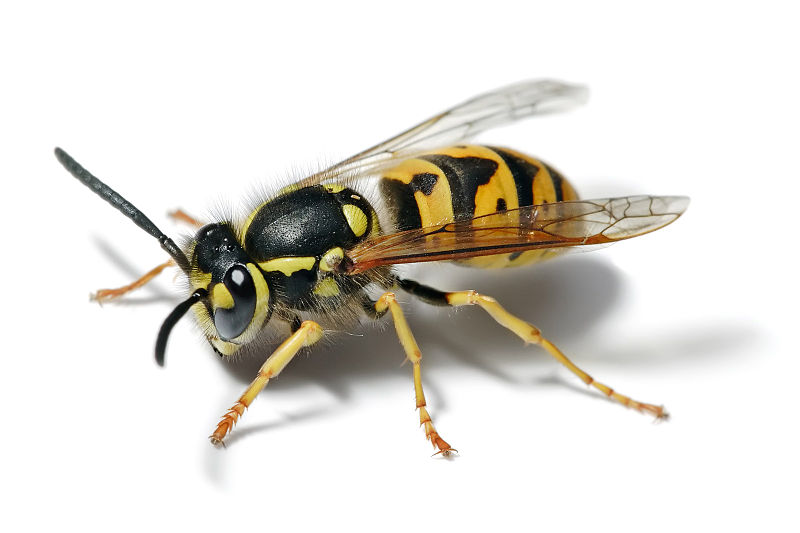 If you have ever been chased and stung by a yellow jacket you must be surprised that the title of this post suggests that they are good insects. The truth is that yellow jackets prey on other insects many of which are garden pests, so in some way they can be considered beneficial. They also chew on sweet ripe fruit such as strawberries, blueberries and melons so can be considered a garden pest. Either way, knowing the characteristics of these fearsome insects make life easier for the gardener.

Yellow jackets are wasps and the workers are usually about ½ to 1 inch long with bright yellow and black, or white and black bands on their abdomens. Their wings are transparent and folded back when the wasp is at rest. The stinger is a modified egg-laying device (ovipositor) and females can sting multiple times, unlike a honey bee that can sting only once. Queens are twice the size of workers and males (drones). Yellow jackets can be distinguished from bees by the lack of hair on their bodies and the shape of the hind legs; those of honey bees are flattened for carrying pollen while those of yellow jackets are slender and not flattened.

Yellow jackets live in colonies in abandoned rodent holes, in the crevices of walls, or in hallow trees. A new nest made of wood fiber chewed to a pulp-like substance is begun every year by a single queen. After the queen lays her eggs and cares for the larvae, new adult worker wasps emerge and take over the care of the nest while the queen devotes herself to laying more eggs that develop into fertile females and males. The population in the nest is small at first but grows all summer long reaching a peak in late summer. The males fertilize the fertile females and then die. The fertilized females find a sheltered spot to spend the winter and hibernate until spring when they begin the cycle again.
Yellow jackets are very protective of their nests and become more so as the summer wanes and food sources become less abundant. If you come near their nest they will attack and even chase you. Sudden movements seem to rile them up. Toward the end of summer they tend to haunt garbage pails and other such sources of sugar so often are unwelcome visitors at picnics. They are most aggressive on hot sunny days especially at the end of summer, but go back to their nest at night.

If you have the misfortune to have a yellow jacket nest in your garden here are some suggestions for coping:

1. Watch for nests and avoid them
2. Avoid using perfume, suntan lotions, fragrant soaps, hair spray and other items with sweet scents.
3. Wear white or gray clothing.
4. Work in the morning or evening when the yellow jackets are less active and feisty.
5. When eating out of doors put some raw meat or sweets (soda will do) at a distance from where you are dining to lure them away.
6. Keep tight lids on all garbage cans.
7. Don’t brush at the yellow jackets if they land on you or come near you.

If you get stung try a mixture of water and either baking soda or meat tenderizer containing papain. Antihistamines and cortisone cream may reduce the swelling and itching that follows the initial pain. People who are allergic to bee stings may need special treatment including medical attention.

Of course you probably will want to eliminate the nest but remember that the yellow jackets are predators and eat many garden pests. If the nest is in your house or a part of the garden that you pass daily, you may not have a choice. You can do it yourself but unless you are very effective on your first try you could end up with a very serious problem.  Professional help with this problem is worth the money.