Root-Knot Nematodes (Meloidogyne spp.) and How to Control Them 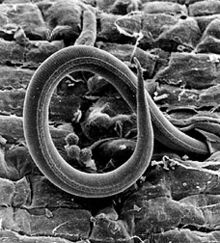 Sometimes a plant wilts easily, has a yellow appearance, fails to grow properly, and slowly dies. No signs of insect or fungal damage can be seen; fertilizing and watering does no good. The problem may be nematodes. True, there are some good nematodes that pursue such garden pests as borers, root weevils, cut worms, and wireworms, and can be bought and sprinkled on the soil in water to control these pests. But the root-knot nematode is a different species and a very real problem for many garden plants including vegetables, fruits, and ornamentals, hurting productivity and appearance.

Nematodes are tiny round worms that live primarily in the soil and can only be seen with the aid of a microscope or hand lens. They are round, tapered at both ends, and not segmented like an earthworm. Over 2000 plants including strawberries, potatoes, beans, cabbage, lettuce, peas, turnips, carrots, tomatoes, cucumbers, squash can be affected. Adults females lay eggs with or without being fertilized by males. The eggs are laid in the soil or plant roots and may occasionally be seen in masses in the soil. The larvae hatch, feed, and grow into adults, but only eggs and larvae can overwinter.

The root-knot nematode larvae produce galls or “knots”; on the roots of the plants which hinder the uptake of water and nutrients. Without sufficient nutrients and water, the plants wilt easily, look nutrient deficient, may become stunted or deformed, and eventually may die. The galls can be quite large and are visible when the plant is lifted from the soil. The number of galls depends on several factors such as the number of nematodes in the soil, the kind of plant, and even the cultivar, some being more resistant than others.

Nematodes thrive in coarse soil with hot climates or where winters are short. They are difficult to control or eliminate and can easily be spread from one area to another by tools. If you have an infestation of root-knot nematodes and can not avoid using the area for gardening there are some steps you can take to reduce the amount of damage.

Sterilize all tools with bleach in water to reduce the spread of nematodes from one place to another.

Work in as much organic matter as possible. This will help build up a population of parasitic fungi and bacteria that will attack the nematodes.

Let an area be fallow every few years.

Plant a cover crop such as French or African marigolds and plow it into the soil. These plants (and some others) release chemicals that are poisonous to nematodes.

Rotate crops in the vegetable garden and annual beds. This is difficult to do effectively, however, because so many plants are susceptible to the same kind of nematode.

Avoid planting perennials in nematode-infected soil where past experience has shown the perennial is attacked.

There are presently no chemical nematicides available to the home gardener so you have very little choice but to use organic means of controlling nematodes like those suggested above. None of the suggestions will eliminate the nematodes but they will allow you to grow reasonable healthy plants in the soil at least some years. Although you will never be able to eradicate the nematodes entirely, you may be able to reduce their number so that the plants can survive, look well, and/or produce flowers or fruits. The addition of organic matter to the soil together with a regular irrigation regime will increase water and nutrient availability. This in turn will reduce the impact of nematode damage.