Ten Interesting Facts About Japanese Beetles as an Aid to Control

There are few things more frustrating or discouraging than working hard to create something beautiful and then having to watch it made ugly and be destroyed. Anybody who gardens has probably had this experience due to deer, rabbits, voles, moles, molds, Japanese Beetles or other pests. Knowing your enemy is empowering so I have been researching Japanese Beetles, my current nemesis, and here are some interesting facts about their life cycle that help to understand and control them.

1. Adults emerge from the soil on warm sunny days beginning in late June and continuing through July. They warm themselves and then begin to feed as soon as possible. Although they eat over 400 plant species they prefer only about 50.

2. Feeding adults release a congregation pheromone with attracts other adults as they emerge later so that masses of adults gather on some unfortunate victim plant.

3. As females emerge they release an additional sex pheromone that attracts males. Mating may take place on turf with several males waiting for the opportunity with the newly emerged female.

4. Mating may also occur while feeding. I have seen three and four beetles stacked up in a mating position and wonder who is mating with whom and how do they figure it out.

5. After feeding for a couple of days the females stop feeding in the afternoon and burrow into the soil to a depth of 2-4” and lay 1-5 eggs in the soil.

7. Under warm, moist conditions the eggs hatch in about 2 weeks and develop into grubs that feed on the roots of plants such as grass.

8. Grubs burrow deep into the soil as temperatures fall and return to the top layer in spring when temperatures rise.

10. The pupae form adults by mid to late June and the cycle is complete.

There are insecticides that are effective but since they also hurt bees, butterflies, earthworms, and other wildlife directly or indirectly I choose not to spray.

Traps are discouraged by most authorities because they will attract the beetles from all over your neighborhood into your garden. Once there they will be attracted by the pheromones to the plants where your own beetles are feeding and mating. If you want to buy a trap, buy one for your neighbor.

Biological methods of control involve bacteria and nematodes and are not considered very effective.

Keeping the lawn and garden soil dry to impede the development of the eggs and grubs is a possibility but may hurt the lawn and garden more than it hurts the beetles. If it rains your efforts will be useless and you will loose this years plants no matter what.

Picking the beetles off our plants by hand is the best alternative and for the past three years has worked. We sustain some damage to both flowers and leaves but nothing so bad that the plants will not recover. We have to put in about 30-40 minutes/day the first week but the process is very easy and the time spent collecting goes down .

Our Plan of Attack 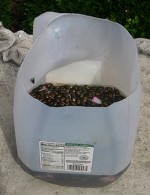 The head gardener (a.k.a my husband) cut a gallon milk jug into a collection container (see picture). It has a handle and a large opening so we can shake a fairly large leaf or branch into the opening. We put a couple of inches of water and a few squirts of dish detergent into the jug.

We start our collection between 10:00 and 12:00 in the morning after the sun has warmed the soil and leaves of plants. All we do is shake the branch, flower or leaf on which we see beetles and they drop right into the jug and drown. This is not the prime collection time but we want to decrease the feeding damage.

We do another collection between 2:00 to 4:00 PM when we know that we will find a lot of beetles feeding and mating. By this time the pheromones are causing large clusters of beetles to congregate on relative few flowers and leaves. We don’t want the fertilized females to get a chance to lay eggs.

We do a final collection about 7 PM and see many beetles still feeding and mating.

We start the process as soon as we see the first Japanese beetle in June and continue until we see no more beetles. Most of the problem is in the rose garden where the beetles congregate on certain roses (mostly yellow ones) and ignore others. A few beetles can be found on some of the plants in the formal garden about 100 feet away. I feel sure that our roses are attracting beetles from the formal garden as well as all over the neighborhood but even so we are able to get control over them in a couple of weeks.

I am sure there are other methods for controlling these pests and if you think about their lifecycle you might come up with a fantastic plan that suits your garden and circumstances better than our method. Understanding the enemy is power!