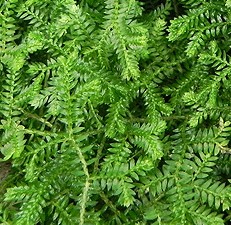 African club moss is also known as Krauss’ spikemoss and Krauss’s clubmoss and is native to southern and tropical Africa, the Azores and the Canary Islands. After being introduced into New Zealand it became invasive but is cultivated in the US and Britain as an house plant earning the Royal Horticultural Society’s Award of Garden Merit. Several cultivars are available. African club moss belongs to the club moss family (Selaginellacea) and is often referred to as a “fern ally” because it has vascular tissue but does not produce flowers or seeds. Selaginella is the only genus in the family but is comprised of about 750 species. African club moss thrives in fertile, moist, well-drained shady habitats such as forests, shrublands, and stream banks.

Description:
Plants are low-growing to about four inches tall and form a dense groundcover of slender irregularly branched stems that are covered with small green leaves arranged in rows. The stems readily root at the nodes allowing the plant to spread quickly. In addition the plant produces spores that are spread by such agents as animals and water.

Control:
Plants are easily removed by hand pulling but care must be taken to remove even tiny pieces as they can regenerate. Large or severe infestations can be treated with glyphosate but several follow up applications may be needed.