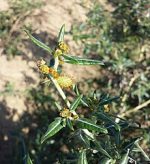 Also known as prickly burweed and spiny cocklebur, bathhurst burr is an annual and a member of the aster family, Asteraceae, that also includes sunflower, yarrow, and lettuce.  It  is probably native to South America but is found in temperate regions around the world growing in disturbed habitats  such as pastures, crops, grasslands, and floodplains.    Bathhurst weed was probably  introduced into New England as a waste produce of the wool carding industry in the 19th century and is now considered a noxious weed in many agricultural crops where it significantly decreases forage production.  Although it has been used to treat a variety of ailments it is toxic to most domestic animals, especially swine and horses.  Plants like full sun and average, moderately moist, well drained soil but tolerate less.

Description: The much branched plants have slender stems that are striated, yellowish or brownish gray and 3′  or more long.  The spirally or alternately arranged leaves are lanceolate or irregularly lobed, entire and about 1-3″ long.  They are silvery beneath and dull gray-green above with a conspicuous white midrib.  A yellow, three pronged spine about 1-2″ long grows in the axils of the leaves.  Inconspicuous male and female flowerheads consisting only of disc flowers appear on the same plant during the summer into late fall.  The male flowers are in dense terminal clusters near the topmost leaves while the female flowerheads are axillary among the lower leaves.  Fertilized female flowers develop  into egg-shaped yellowish burrs about .5″ long and covered with small hook-like spines.  Each burr contains two slightly flattened, thick-coated seeds.  The two seeds in each burr differ in dormancy period; one germinates a few months after maturity, while the other can remain dormant for up to eight years.  Each plant produces up to 150 seeds.   The burrs carrying the seeds float on water and readily attach to clothes, the  fur of animals, and other objects,  which facilitates dispersal. Photo Credit Wikipedia

Control:  Mechanical control such as hand pulling, hoeing, and mowing is effective if done before flowering.  All plants with burrs must be removed from the field because they are a potential seed source even when cut.  For large areas and severe infestations herbicides may be necessary.  Possible herbicides include  2,4 D ester at the 3-5 leaf stage of growth and dicamba.  Both of these herbicides are non-corrosive and generally considered non-harmful to wildlife.  2,4 D persists in the soil for 1-4 weeks while dicamba persists for 8 weeks, has  low toxicity to fish, and is more selective than 2,4 D.  Because of the toxicity and unpalatability of  bathhurst burr, grazing is not a useful control measure.  Controlled burning is an effective control method but is usually not employed.  Biological control is being investigated but is not available at the present time.