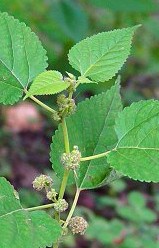 Mulberry weed is an annual in the mulberry family (Moraceae) and a native of East Asia where it lives in wetlands and other moist shaded areas. It appeared in Lousiana in the 1950s and is now found in much of eastern US west to Texas and north to Michigan as well as along the west coast from Washington to California. The weed likes full sun to part shade and moist soil but tolerates less. It is especially troublesome in greenhouses and nursery containers but is also found in garden beds, lawns, and other disturbed soil.

Description
A single stems grow from a taproot and can range in size from twelve inches to over four feet. The stem is hairy , branched, and light green sometimes tinged with a reddish to purple at the base. The leaves are hairy, triangular to heart shaped and have toothed margins. The tiny light green to purplish flowers are carried in tight clusters in the axils of leaves from late spring to early fall and are followed by one-seeded dry tan fruits that are forcibly expelled up to four feet from the plant. Since plants may flower and produce seed twelve days after germination many generations can occur in a single growing season.

Control
Since the plant is an annual, removal of the plant before flowering is important. Young plants can be removed by hoeing, older plants by hand pulling. In both cases, the plants must be severed from their roots well below the base of the stem because plants readily regrow from broken stems.

A preemergence herbicide such as Dimension® 2EW can be effective in preventing seed germination while postemergecet herbicides such as RoundUp are effective when the plant is small and actively growing.