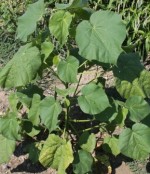 A native of southern Asia, velvetleaf is also known as Indian mallow. It was introduced into North American in the 1700s and is now found throughout the US. It is considered an invasive weed in agricultural areas of eastern and midwestern US, causing considerable harm to crops especially soybeans and corn. Velvetleaf takes both nutrients and moisture from other plants and can also shade out small plants because of its height and large leaves. Velvetleaf thrives in sunny gardens as well as in disturbed sites such as roadsides.

The common name “velvetleaf’ is apt but tells only part of the story. The leaves are velvety with fine hairs but the whole plant is hairy too. Plants grow up to 7 feet tall on hairy mostly branched stems. The heart-shaped leaves are two to six inches long and wide, and hairy on both sides. They have an unpleasant odor when crushed. The yellow to orange flowers have 5 petals and are produced from mid-summer to mid-fall, giving way to a circular, flat-topped capsule about one inch in diameter that is green at first but turns brown with maturity. The capsule consists of sections which break off, each section containing many hairy seeds that can remain in the soil for fifty years. A taproot anchors the plant.

Eliminating seedlings by hand pulling or hoeing is an effective means of eliminating this weed from a home garden. Larger plants can be pulled up and will not resprout in spite of the taproot if the break from the root occurs below soil level. Since velvetleaf is an annual, it will not grow back the following year but seeds are a constant source of a new supply for future years. Eliminating the weed before it produces seeds is an important step in control. For large areas or very bad infestations broadleaf herbicides are effective. Several applications are generally necessary as seeds germinate throughout the growing season.