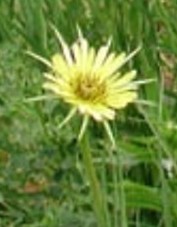 This annual or biennial weed is a native of Eurasia and North Africa but was brought to North America about 1900 and is now common in most of the United States and Canada where it is found in sunny disturbed sites such as along roadside and train tracks as well as in waste areas and abandon fields. Its widespread distribution has earned it several colorful names including yellow salsify, western goat’s-beard, and wild oysterplant. The generic name, Tragopogon, comes from two Greek words, trogos meaning goat, and pogon meaning beard, referring to the possible resemblance of the seed head to a goat’s beard.

The first year the plants form a rosette of leaves. In the second year the fleshy taproot sends up slightly branched stems that are hallow and grow one to three feet tall. The gray-green to blue-green leaves are grass-like and triangular in cross section. They measure about half inch wide by one foot long, and clasp the stem. Both leaves and stem exude a milky sap. The two inch wide flowerheads are produced singly at the top of the stems from late spring to early summer and are made up of numerous yellow florets. The flowerheads open in the morning and close about noon, which accounts for the common name “salsify” which means “a plant that follows the sun” . Flowers may not open at all on cloudy days. The fluffy seed head resembles that of dandelions but are larger, up to four inches, and tan in color rather than white.

Control
Handpull rosettes as soon as they appear. Older plants are difficult to hand pull because of the taproot. Because the plant reproduces only by seed and is an annual or biennial, removing the flowers by shearing or mowing before seed set will ultimately eliminate it. In severe infestations dicamba plus 2,4-D applied at the rosette stage is effective.