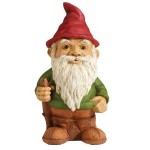 Some people love them, other people hate them. Gnomes are popular with many gardeners but the organizers of the Chelsea flower show banned them because they detracted from the garden design. Originally made in Germany in the 19th century, garden gnomes were wooden figures with beards and red pointed hats. They are used as garden ornaments or to protect gardens and lawns from evil spirits. Some scholars associate them with the ancient mythical god, Priapus, who was a rustic fertility god who protected fruits and gardens.

The ancient Greek writer Pausanias (Description of Greece 9. 31. 2) tells us that Priapus was “worshipped where goats and sheep pasture or there are swarms of bees; but by the people of Lampsacus he is more revered than any other god, being called by them a son of Dionysus and Aphrodite.” According the ancient myth, Hera, driven by her hatred of Aphrodite, cursed the baby Priapus while still in the womb so that he was dwarfed with very large genitals, but impotent. Other sources say that Priapus was the son of Aphrodite and Zeus with Hera acting out of jealousy.

Priapus became a scarecrow of sorts by Roman times. In Georgics, book IV, Virgil says “let the defense of Hellespontic Priapus, the guard against thieves and birds with his wooden sickle, protect the gardens.” Another Roman writer, Columella, in his poem on gardening advises the gardener to “place him (statue of Priapus) in the middle of thy garden, and pay homage to him as its guardian, that he may deter the plundering boy with his monstrous parts and threatening scythe, and keep the robber from intended pillaging.”

Rocket, also known as arugula (Eruca sativa) was dedicated to Priapus. It has a strong peppery taste and is grown for its seeds that are used to make oil and its leaves that are used in salads. According to legend, rocket provokes desire, a sad association since Priapus was impotent. 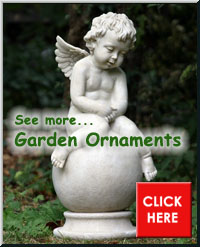 Unfortunately, Priapas became more closely connected to pornography as time went on because of his large genitalia. His significance as protector of the garden diminished. Were garden gnomes derived from Priapus? No one knows for sure. 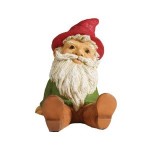 To buy a garden gnome from Amazon.com click here.