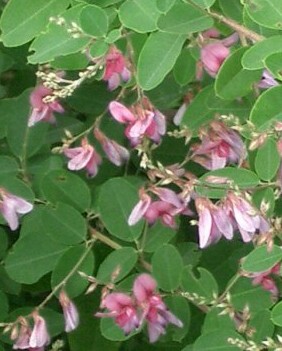 Bush clover is a loose deciduous medium sized shrub native to eastern Asia but introduced into the United States in the mid 1800’s as an ornamental. Later used for erosion control, revegetation of strip mined lands, and the improvement of wildlife habitats, it escaped cultivation and now has become invasive in parts of the Southeast. As an ornamental, bush clover offers dark green trifoliate leaves on gray to green stems and long arching sprays of five to fifteen small magenta-purple pea flowers. Bush clover is drought tolerant and grows well in infertile, medium dry well-drained soil and full sun to part shade, so is a good choice for difficult sites. Its roots fix nitrogen. In harsh climates it can be cut to the ground in late winter or early spring and will regrow to five feet tall in a single season. Two cultivars are available that are smaller and less invasive than the species.

Bloom: Five to fifteen pea-like magenta purple flowers, half inch long, are produced in 2-5” long racemes on the upper 2’ of the stems in late summer.

Propagation: Seed,; half-ripe cuttings in July/August but difficult to over winter new plants.