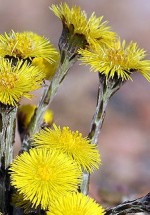 Coltsfoot is not the most popular medicinal herb but it may be the oddest; it produces its flowers long before it produces leaves but doesn’t produce any stem leaves. In early spring woolly shoots emerge bearing yellow flowers that resemble a dandelion and give way to masses of fluffy-topped seeds. After the flowers fade an the seeds are set, the root sends up basal, hoof-shaped, green leaves with a woolly underside. The leaves have been made into tea or tobacco since ancient times and used as a remedy for coughs and other respiratory ailments leading to the generic name Tussilago that comes from the Latin tussis meaning cough. Internal use of the plant, however, is not recommended because it contains chemicals that can cause liver problems. Still, the plant has value; for example, the fuzz on the seeded flower is said to have been used by Scotland highlanders as pillow stuffing. Found along stream banks, in fields, and in disturbed areas, coltsfoot is native to northern Europe, Asia, and north Africa, and was probably brought to North and South America by colonists for medicinal purposes. It spreads by seeds and rhizomes and can be invasive. Once established in a garden it is hard to eradicate.

Bloom: Yellow flowers 1/3” across are produced on leafless, woolly stems in early spring.

Care: May become invasive and need to be contained.

Next post: Spring Blooming Plants for A Cottage Garden Wall