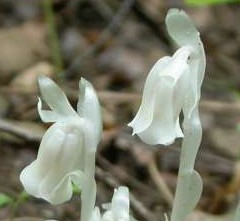 Also known as corpse plant and ghost plant, Indian pipe is a herbaceous perennial native to various areas in Asia, South America, and North America, but rarely seen. Unlike most plants it is white, or white with black flecks or with a flush of pink. Instead of making its own food like most other plants do, it depends on a complex relationship between a special kind of fungus that is mycorrhizal with a tree, often beech. The tree provides sugar from photosythesis to the mycorrhizal fungus that in turn, helps the tree absorb water and minerals. Indian pipe parasitizes the mycorrhizal fungus and gets some of the sugar from the tree while contributing nothing to the relationship.

Indian pipe is usually found growing as a single stem or in clumps of up to twenty. Each stem bears small scale-like leaves a single nodding flower with 3-8 petals. Once the flower has been pollinated it turns upward and remains in that position as seed capsules are formed. Since the plant does not produce its own food it can live in in dark areas such as dense forests where little sunlight penetrates and the soil is rich in organic matter.

Pests and Diseases: None

Propagation: Seed (very difficult because you need the fungus as its host)

Previous post: Birds in the Garden: Plants That Attract the Woodpecker Family (Picidae)