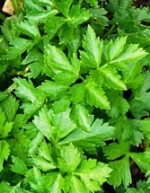 When you think of celery you probably think of a vegetable that has long whitish stalks topped with pale green leaves but that is not the only celery that can be grown in the garden. Leaf celery is an interesting plant that perhaps is grown as an herb rather than as a vegetable so don’t expect the long stalks. Focus instead on the leaves that have the taste of the vegetable celery and are a good substitute for it in soups and stews. The leaves are also used as a garnish and sometimes in salad, although they are generally considered too strong for salad. Although easier to grow than vegetable celery, leaf celery needs cool temperatures and frequent watering. Also known as cutting celery, Parcel, Smallage, Zwolsche Krul, and German celery it is suitable for containers.

Care: Plants are slow to get going but once established do well and can be cut continuously over the growing season as leaves grow back.

Propagation: Start seed indoors no sooner than 2-3 months before last frost date; do not cover with soil as light is needed for germination. Water from the bottom and look for seedlings in 2-3 weeks at 59 F. Germination is erratic.

Companion plants: Vegetables in the cabbage family because it repels the white cabbage butterfly.