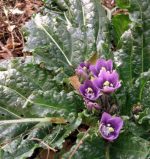 Also called love-apple, mandrake is a very variable herbaceous perennial that is native to the Mediterranean area including Israel and the Levant and some sourses would classsify mandrakes in the eastern Mediterranean as M. autumnalis.    It is a member of the nightshade family, Solonaceae, that also includes potato, tomato, and eggplant.  The plants have a short stem  bearing a rosette of ovate leaves and a thick forked root that is highly toxic and resembles the lower half of a human body.  The leaves are up to 18″ long and vary in hairiness.  In spring, bell shaped flowers with 5 speals and 5 greenish white to pale blue or violet petals appear in the leaf axils on stalks up to 18″ long. Yellow to orange egg-shaped berries  up to 1.6″ wide appear from late autumn to early summer and contain numerous light brown seeds.  The hallucinogent and narcotic  properties of  mandrake and the resemblance of its root to the human form have led to a long association with superstition, witchcraft, and magic as well as medicine.  In past times mandrake was believed to scream if touched and could only be safely uprooted by tying a black dog to the plant in moonlight and and having the dog run after its master. Anyone hearing the scream of the mandrake would be driven mad but once uprooted, the mandrake protected its owner from evil spirits.  The genus name, Mandragora, is the classical Latin name for the plant.  The specific epithet, officinarum, is the classical Latin word meaning of workshops and refers to the real or supposed medicinal properties.

Bloom: Greenish white to pale blue or violet flowers with 5 petals from autumn to spring

Companion Plants: Other herbs such as rosemary, corriander, garlic

Next post: Plants of the Bible: Lentil (Lens culinaris aka Lens esculenta)