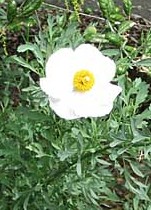 Matilija poppy is a deciduous suckering subshrub native to Southern California and Baja California where it grows and is associated with chaparral and coastal sage scrub plant communities. It is frequently grown as an ornamental because of its large, solitary white flowers borne at the ends of the stems. Each poppy-like flower is six to eight inches across and consists of six crepe-paper like petals surrounding a mass of intense golden stamens.The gray-green leaves have a waxy texture and are deeply divided. The woody stems arise from rhizomes that account for the tendency of  new plants to pop up all over the area were the mother plant is growing. Matilija poppy is hard to establish and resents being moved but is drought tolerant once it takes hold. Like many other poppies, the plants fade after blooming and can be cut back to three to four inches. The hybrid ‘White Cloud’ has similarly sized flowers but is less rambunctious and therefore more suitable for most gardens.  Yes, this plant is also known as the “fried egg plant” but that name does not do it justice.

Bloom: Large, solitary flowers 6-8″ across, with petals arranged around a mass of deep gold stamens; in spring