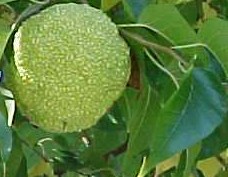 This deciduous small to medium sized tree is a native in parts of Arkansas, Texas, and Oklahoma but has spread widely through the Great Plains where was planted in the mid-1930’s as part of President Franklin Delano Roosevelt’s “Great Plains Shelter-belt” WPA project. It’s use as a windbreak gave rise to a second common name, “hedge apple”. Mature trees are arching and spreading, and branches have half inch long spines and exude a milky sap when cut. The shiny dark green leaves are long ovals ending with a pointed tip and may turn bright yellow in fall before falling later in the season than most other trees. Inconspicuous green male and female flowers are produced on different trees in early summer and female flowers give rise to conspicuous pale green fruits that are four to five inches in diameter. Each fruit has a rough chartreuse green exterior and actually consist of numerous small fruits that grow together. Female flowers may produce fruit even when not fertilized but the fruit lacks seeds. Fruit litter under female trees can be a problem. The fruits are produced in the fall and are attractive in arrangements. The fleshy roots have orange bark. The wood of osage orange is very strong and Native Americans used it for bows while ranchers and farmers used it for such items as fence posts and tool handles.

Outstanding Features: Fruit; tolerance of a wide variety of soils and drought

Next post: How to Care for Bonsa: Miniature Holly (Malpighia coccigera)