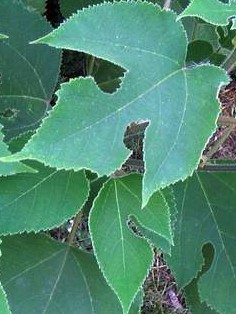 Paper mulberry is deciduous tree or shrub native to Japan, China and Polynesia where it has been used to make paper, cloth, and medicine. It was introduced into eastern United States for use as a shade tree and has become invasive in some areas due to its rapid growth, suckering nature, and self-seeding habit. It is tolerant of heat, humidity, urban pollution, drought, and a wide variety of soils, and is often found in recently disturbed areas, waste areas, forest edges, and along roadsides where it may produce dense stands. The leaves are three to ten inches long and variable in shape even on the same plant from oval to mitten and heart shaped, often with prominent lobes. Their fall color can be attractive. Clusters of light green male or female flowers are produced on different plants in spring. Male flowers are in three inch long catkins while the female flowers are in balls. Fertilized female flowers give rise to showy red-purple fruits half to one inch in diameter and are attractive to wildlife who contribute to seed dispersal. Bark is tan and smooth, developing some furrowing with age, and twigs contain a milky sap. By planting only male trees, the tendency to self-seed is reduced and paper mulberry can be a useful tree.

Pests and Diseases: None of significance but susceptible to root rot, canker, and leaf spot.

Next post: Weeds and Their Control: Wild Buckwheat (Polygonum convolvulus)