Also called wild carrot, bird’s nest, and bishop’s lace, this herbaceous biennial is a member of the parsley family, Apiaceae, that also includes celery, dill, and poison hemlock.  It is also the plant from which all cultivated carrots were cultivated.  A native of Europe, southwest Asia, and North Africa it naturalized in North America where it became invasive  and now can be found in open grasslands, meadows, roadsides, abandon fields, waste areas, and degraded prairies.  Plants grow 24-48″ tall and have leaves that are roughly triangular in shape, tripinnate, and finely divided.  The small cream-colored flowers are carried in dense flat  terminal umbels 3-4″  across from May to October. Some flowerheads have a single red to purple flower in the center which is believed to attract insects. As the flower heads mature they curl up to form a bird’s nest like structure. Care should be taken when handling the plant because the leaves can cause skin irritation in susceptible individuals. The genus name, Daucus,  is the ancient Latin word for carrot.  The specific epithet, carota, comes from the Greek word karoton meaning carrot.

Bloom: Tiny white flowers are borne in umbels up to 3” across May to October. Some flower heads have a single purple flower in the center.

Soil: Tolerant of many soil types and is common in roadsides and fields in many parts of the country.

Fertilizer: An organic mulch will provide all that is needed.

Care: In some areas it may become invasive and must be removed by digging out the tap root and collecting seed heads before they ripen.

Pests and Diseases: None of importance. 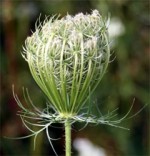 Companion plants: Queen Anne’s Lace is a wild flower and so can be nicely combined with other such plants like grasses, black eyed Susan, butterfly weed, golden rod, coneflower, thistle, and common mullein.

Comments: Caterpillars of the Eastern Black Swallowtail butterfly eat its leaves and bees and other insects use its nectar.

Next post: Summer Blooming Plants for Gardens in Afternoon Shade