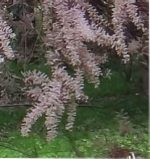 Smallflower tamarisk is a deciduous shrub or small tree native to southeastern Europe but has become as an introduced species in the US has become invasive in western North America.  It has a deep tap root,  rough reddish bark, and low branching rounded habit with many long, slender branches. The linear bright green leaves are scale-like and about 1″ long. The tiny light pink flowers  have four petals and appear in short clusters 1-1.5″ long in early spring on the previous year’s growth.  Plants need full sun and tolerates almost any soil including saline.  They also tolerate salt air, wind, and desert conditions.    Because of its invasive tendencies especially in moist soil, smallflower tamarisk is not recommended for garden use in most locations but can be useful as a hedge or screen and is sometimes used for bonsai.  The genus name, Tamarisk, is the Latin name for the plant.  The specific epithet, parviflora, comes from the Latin words parvus meaning small, and flos meaning flower.

Care: Prune after flowering to shape;  can be cut back to the ground.

Comments: Tolerant of seaside conditions; can be invasive.

It is native to southeastern Europe but it is well-known elsewhere, such as western North America, where it is an invasive introduced species.

It easily inhabits moist habitat, especially in saline soils. It is a shrub or tree growing up to about 5 meters tall. The branching twigs are covered in tiny linear leaves no more than 2 or 3 millimeters long. The inflorescence is a dense spike flowers 1 to 4 centimeters long. Each tiny flower has four pink petals.