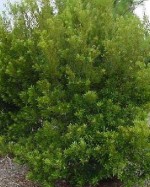 Also called southern bayberry, wax myrtle is a native of Southeastern United States and the plant that is known from colonial times for providing the wax for bayberry candles. The wax is borne on the blue-gray berries and can be obtained by submerging the berries in boiling water and skimming of the oil as it floats on the surface. The candles were highly prized in colonial times for the fragrant scent they gave off as they burned.

In modern times, wax myrtle is extensively used in the South as a landscape plant. It is evergreen and bears insignificant flowers in late spring. Plants are either male or female and only the female plants produce the small berries. Plants are fast growing and undemanding if given some sun and well drained soil. They can be pruned into a shrub or small tree so can be used in many ways in the garden.

Form: Vase-shaped to round

Pests and Diseases: None of significance; caterpillars and mites may attack the foliage; high pH soil may result in yellowing of leaves

Previous post: The Difference between Plant Variety and Cultivar