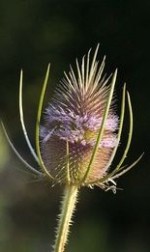 Brought to North America from Europe in the early 1700’s to raise the nap of wool cloth, this fuller’s teasel naturalized and is now considered a weed in many parts of the United States where it grows in sunny disturbed sites such as roadsides, riverbanks, and forest openings, and in savannas, grasslands and meadows   It is a biennial and a member of the  honey suckle family, Caprifoliaceae, that also includes weigela, scabiosa, and abelia.  In the first year the plant grows a tap root and forms a rosette of large coarse lanceolate leaves up to 12″ long.  In the second year  several spiny stems up to 6’ tall arise bearing sessile spiny leaves and clusters of spiny flowerheads from summer into fall. Each egg-shaped  flowerhead are up to 4″ long and consists of numerous small pink, purple or lavender flowers, subtended by long pointed bracts. The flowerheads produce an abundance of 1 seeded fruits, called achenes, that have a high germination rate so plants readily reproduce themselves.  Butterflies and bees love the flowers, birds especially goldfinches love the seed, and the dried seed heads look fabulous in dried arrangements. Suitable for a wildflower garden if seed dispersal is controlled.   The genus name, Dipsacus, comes from the Greek word dipsa meaning thirst of water and refers to the cup-like formation made where sessile leaves merge at the stem.  The specific epithet, fullonum, comes from the Latin word fullo meaning fuller and refers to the use of the seed heads in the manufacture of wool by fullers.

Bloom: egg-shaped  flowerhead are up to 4″ long and consists of numerous small pink, purple or lavender flowers, subtended by long pointed bracts from summer into fall.

Next post: Weeds and Their Control: Green Foxtail (Setaria viridis)