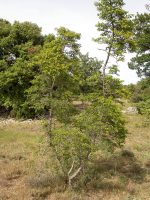 Also known as Jerusalem thorn, garland thorn, or crown of thorns, this deciduous shrub or small tree is native to the Mediterranean region and southwest and central Asia.  It is a member of the hawthorn family, Rhamnaceae, that also includes California lilac and jujube tree. The straggly plants grow 16-20′ tall and have zigzag pliable branches bearing a ovate to round, leathery, glossy green leaf  3/4-1″ long.  Each leaf is finely toothed and has a straight and a curved stipular spines on the outside of each twist.  From July to August clusters of small greenish flowers appear and are followed by leathery, brownish yellow nutlet surrounded by a circular wing about 1″ across. Photo Credit Fritz Geller Grim Wikipedia

There are many spiny plants mentioned in the Bible and little agreement on what plants are intended.  Various words are used to translate the Hebrew words including brambles, briers, thorns, and thornbushes and many plants are suggested as possible spiny trees, shrubs or herbs.  One of the more interesting controversies regards the crown of thorns placed on the head of Jesus before the crucifixion.  Two major possibilities have been posed:  Ziziphus spina-christi (Christ’s thorn jujube) and Paliurus  (Christ’s thorn).  Experts agree that Ziziphus is very common around Jerusalem while Paliurus is not.  On the other hand, Ziziphus is a tall tree making gathering the branches difficult while Paliurus is lower to the ground so easily harvested.  Paliurus is also flexible enough to form into a crown while Ziziphus is somewhat more brittle.  The controversy rages but one thing is for certain; Euphorbia milii also called crown of thorns, is definately NOT the plant used for the crown as it is native to Madagascar and not known in Jesus’ day. 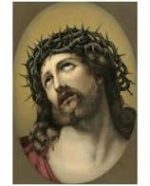 Matthew 27:29 (NIV) Matthew describes the treatment of Jesus by the soldiers as they led him to the site of the crucifixion.

“and then [the soldiers] twisted together a crown of thorns and set it on his [Jesus’] head. They put a staff in his right hand. Then they knelt in front of him and mocked him. “Hail, king of the Jews!” they said.”

“The soldiers twisted together a crown of thorns and put it on his head. They clothed him in a purple robe”

Christ’s thorn likes full sun to light shade and average, dry to medium moist, well-draind soil in USDA Hardiness Zones 7-10 but tolerates drought and very alkaline conditions.  The plant is generally healthy and is relatively resistant to honey fungus.  Propagation is by seed, semi-ripe cuttings in summer, root cuttings in winter, and layering.  Christ’s thorn is sometimes used as a hedge.

The genus name, Paliurus,  is the ancient Greek name for this species.  The specific epithet, spina-christi, are the Latin words meaning thorns of Christ and refer to its supposed use at the crucifixion.