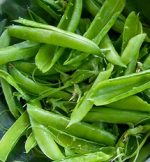 Making beer from peas goes back to 17th century England when brewers and distillers were using peas and other legumes to make alcoholic beverages.  Of course they were using other things too like barley, wheat, oats, and potato.  Peas were also used in the US for beer making and Colin MacKenzie  in his book Five Thousand Receipts In All The Useful and Domestic Arts  published in Philadelphia in 1825 remarked that “No production of this country abounds so much with vegetable saccharine matter as the shells of peas.”  Enthusiam for pea beer seems to have fizzled out in England but interest still remains in Kaunas, Lithuania where the brewery Ragutis produces a lager called Sirvenos in memory of an area in Lithuanian famous for its pea beer.

My paternal grandmother, Helen S. Wright, included one recipe for pea shell beer in her book Old Time Recipes for Home Made Wine, published in 1909.  Here is the recipe in th words of my grandmother:

Fill a boiler with green shells of peas, pour on water till it rises half an inch above the shells, and simmer for three hours.  Strain off the liquor, and add a strong decoction of wood-sage, or hops, so as to render it pleasantly bitter; ferment with yeast, and bottle.