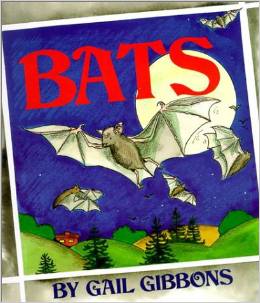 Bats are scary to most people yet few have actually seen one. In her book, Bats, Gail Gibbons presents bats in a positive way and creates an appealing image for them. Written for children ages eight and up, this non-fiction book introduces young readers to many different kinds of bats in a way that fosters an appreciation of their unique characteristics and value in nature.

Although bats are often associated with ghosts and witches Gibbons points out that they are shy gentle animals and are mammals like dogs, cats and humans. They are born alive and are the only mammals that can fly. With a use of a labeled diagram, Gibbons describes the anatomy of bats pointing out their large wings, small bodies, and light-weight bones. She pays special attention to the wings, noting that unlike insect or bird wings, bat wings are formed by long arm bones, very long finger bones, and a membrane that stretches between bones. Gibbons further discusses flying and landing methods, migration, hibernation, roosts, feeding habits, echolocation, and reproduction. She points out that bats are important for the pollination of flowers and the control of insects but that bat populations are declining due to habitat destruction, negative attitude towards bats, pesticides and pollution. She also mentions some of the steps people have taken to protect bats such as providing bat houses or covering cave entrances with grillwork so that people are kept out but the bats can fly freely in and out. A final page presents miscellaneous facts about bats such as bats are symbols of good luck in China and are a tourist attraction in Austin, Texas.

The book is richly illustrated to complement the text and shows over a dozen different kinds of bats including the common little brown bat, the tiny kit’s hog-nosed bat, and the large giant flying fox. Terms such as echolocation, hibernation, and pollination are defined in context and help build vocabulary. The text is simple but contains enough information that multiple readings are needed to absorb it all. An excellent introduction to bats!

Previous post: Beneficial Arachnida and How to Attract Them: Wolf Spiders