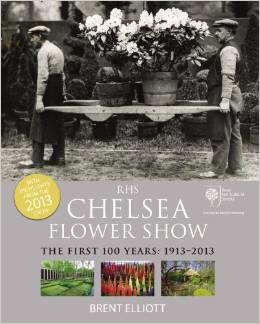 The Chelsea Flower Show is not the biggest flower show in the world but it is probably the most prestigious and influential. Brent Elliot’s book, Chelsea Flower Show: The first 100 Years, traces the history of the show going back to its antecedents and ending with the May 2013 show. If you have ever been to a flower show you will appreciate the features of Chelsea and its importance in horticultural history as well as be inspired by the incredible creativity that it inspires in designers and plantsmen.

The book is a history of the show and is organized chronologically. Each of the seven chapters focuses on a specific time period giving the history and the features that made that period unique. We learn about the rise of flower arranging in the show, how the show was linked with fashion, the introduction of bonsai, and how the California desert exhibition became the most famous single exhibit since it was presented in 1929. Many aspects of the show are described including the creation of the garden for the disabled, the role of the press, the involvement of the Royal Family, the building of show gardens, and the Garden of Tomorrow featuring a radio controlled lawnmower. Each chapter features illustrations from the times including posters that were used to advertise the show, advertisements from Chelsea catalogues, admission tickets, and show schedules. Significant personalities such as Allen Titchmarsh describe in insets what the show meant to them and photographs from the earliest times to the present enliven the text.

Few of us in the United States will visit the Chelsea Flower Show but we can all enjoy it through a book like this. The creativity, beauty, and excitement of the show through its one hundred year history comes through every chapter and can not help but stimulate the imagination and get the creative juices flowing. A wonderful book to enjoy over and over again!

Next post: Birds in the Garden: Plants that Attract the Mockingbird and Catbird Family (Mimidae)