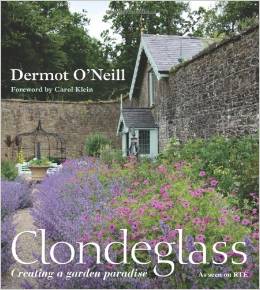 Dermont O’Neil, journalist, TV and radio personality, and gardener, takes the reader with him as he realizes his dream. As a child he had seen a walled garden that inspired him to create one of his own and as an adult he bought a small derelict house with its overgrown garden in the midlands of Ireland and made it into a showpiece. In his book, Clondeglass: Creating a Garden Paradise, O’Neil describes how he transformed a neglected house and piece of land into his own personal sanctuary.

Using before and after photographs, the author shows us how renovated the little house, and designed and planted each section of the garden. He goes into further detail by explaining how he achieved color in each of the four seasons and discusses his favorite plants, why he chose them, and what he did to make them thrive. O’Neil’s passion for plants comes through into his writing and I felt myself wanting to get on the internet to find all the different kinds of crown imperials, dahlias, nerines, and hellebores he planted at Condeglass. Of course, flowers are not the only source of color in the garden and O’Neil zeros in on his favorite foliage plants that he depends on for color through more than one season. He includes purple foliaged plants such as Brachyglottid repanda “Purpurea’, variegated ones like Aralia elata ‘Aureovariegata’, and golden leafed ones like Rhus typhina “Tiger Eye”. O’Neil also shares he insight into good soil development and winter plant protection including the use of a polytunnel in which he grows flowers for the house, tender perennials for the garden, and edible crops such as tomatoes and salad greens.

O’Neil writes a conversational style as though he were talking to the readers as he shows them his plants and garden. As a plant lover and avid collector, O’Neil has a sensitivity towards plants that is felt throughout the book and provides a sense of intimacy that adds to the pleasure of reading. If you have ever considered having a walled garden, O’Neil’s work will inspire you and make the dream seem possible.