Book Review: Founding Gardeners: The Revolutionary Generation, Nature, and the Shaping of the American Nation 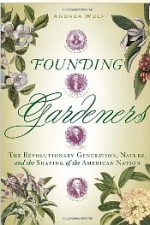 Andrea Wulf’s book, Founding Gardeners, is a unique work that appeals to the history buff as well as the gardener. It examines the lives of the founding fathers to show how their political thought was influenced by their love for nature, plants, gardens, and agriculture. Wulf believes that “ it is impossible to understand the making of America without looking at the founding fathers as farmers and gardeners” and she develops this thesis with thorough research and attention to detail combining scholarship and gift for story-telling.

The text focuses on four men: Thomas Jefferson, George Washington, James Madison, and John Adams. They all shared an avid interest in their agricultural holdings with Jefferson, Washington, and Madison owning large plantations in Virginia, and Adams a smaller farm, Peacefield, in Quincy, Massachusetts, near Boston. We have all heard a lot about these men in United States History courses, and many of us on the East Coast may have visited Jefferson’s Monticello, Washington’s Mount Vernon, and Madison’s Montpelier. This book, however, presents a whole new insight into the creation of the American nation by examining the relationship between these founding fathers and their love for their land.

Wulf’s work deals with both the events surrounding the founding of a nation and the hopes, dreams, thoughts and activities of the founding fathers. Wulf pieced together the details of the men’s lives through historical records as well as personal letters and other sources to produce a narrative that is both entertaining and supportive of her thesis. The founding fathers believed that the colonist’s reliance on agriculture for their main income, combined with the seemingly unlimited resources of the land, would allow America to be self-sufficient. Thus, suggests Wulf, the bounty of the land offered the opportunity for independence and became part of a distinct national identity. No wonder, therefore, that these four founding fathers saw plants and agriculture as more than just a pleasant pastime. They were passionate in their concern for their crops, trees, and soil, and found great pleasure in observing and tending them. It is no surprise to learn, therefore, that Washington found time in New York, while British troops were assembling on Staten Island, to write his estate manager about the ornamental grooves he was designing on Mount Vernon, using all American native trees and shrubs. Even during the terrible winter at Valley Forge, Washington found comfort in messages from home about his beloved estate.

A visit to the gardens of England, Wulf tells us, had a profound effect on Jefferson and Adams. The two men traveled through England visiting the gardens and noting that they were filled with American plants. When they returned home they had a renewed sense of the significance of America in spite of their failed attempts at negotiating a treaty with the English and both men laid out gardens inspired by their visits. Today the results may be seen at Monticello where Jefferson combined the beautiful with the practical as he had seen at Wooburn, England.

Jefferson’s instructions to ex-United States solider Lewis as he set off for his cross continental trip were indicative of the spirit of Jefferson in particular and the founding fathers in general. Lewis was to not only to find a trade route to the Pacific, but also to collect information on climate, animals, soil, vegetation, and Native Americans. If threatened at any point he was to turn back so that the information he had collected would not be lost. The data was more important that the trade route.

A major contribution of Madison to the new nation, according Wulf, was environmental awareness. He spoke out about such problems as soil erosion and the exploitation of timber resources and warned about mans destructive activities. He recommended new ploughing methods, the use of manure to renew depleted soils, and living off nature without destroying it.

Wulf’s stories about the founding fathers placed in their historical context gives us a new appreciation for our country as it is today while providing an abundance of material about horticultural history. Wulf’s careful research comes through on every page and is made even more impressive by the 81 pages of notes, and the 19 pages of selected bibliography. Founding Gardners is written in a lively, entertaining style that creates a book rich in anecdotes and tidbits that make it appealing to anyone interested in gardening, horticulture, or American history.
To buy Founding Gardeners: The Revolutionary Generation, Nature, and the Shaping of the American Nation from Amazon.com click here.