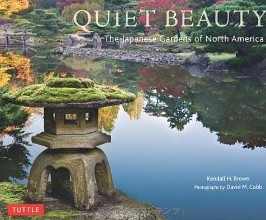 The gardens were chosen according to four criteria; all are public gardens accessible without a reservation, are historically significant, have sufficient size and scale to be considered tourist destinations, and demonstrate how the appeal and adaptability of the Japanese garden style extends to many parts of North America. The twenty-six gardens are presented in five groups defined by their place in the history of Japanese gardens in North America. The first group includes the gardens that grew out of a love for Japanese culture from 1890s to 1920s and included those that were introduced through world fairs, tea gardens, and estate gardens. The second group developed after World War II during the Cold War era and reflect the desire of the US government to promote peace with former enemies through such projects as the sister city program of President Eisenhower. The 1960s and 1970s saw the rise of commercialism and the transformation of Japanese garden design to suit almost any taste and budget, resulting in gardens that form group three. The fourth group overlaps with group three and includes gardens produced by Koichi Kawana in the 1970s and 1980s and feature complex landscapes with many references to famous gardens in Japan as well as new and conventional forms. The gardens of fifth group, created in the beginning of the twenty-first century, emphasize environmental and economic sustainability and concentrate on the fundamentals of Japanese garden design rather than on superficial “authentic” elements.

The book is beautifully illustrated with over 180 color photos that include images of favorite features of Japanese gardens such as moon bridges, stone lanterns, and hipped-roofed pavilions. Even more interesting and beautiful are the photos of less familiar elements such as the flying geese pattern of stone work, a bamboo fence, and a poetry stone. Many photos show the rich flora of the gardens such as skunk cabbage in a moss garden, while others illustrate the principles of Japanese design.

An additional seventy five Japanese style gardens in North America are listed and briefly described in an appendix. Fifteen gardens are listed geographically in each of five regions across North America organized to facilitate a driving trip to visit the gardens. The gardens were selected primarily on the basis of their quality but with consideration given to their historical value and geographic distribution.

Quiet Beauty is a great resource for gardeners that like Japanese gardens and/or would like to create one of their own. The text provides the material needed to distinguish between the various kinds of Japanese-style gardens and the photographs show details that can inspire the imagination. This is not a “how-to-do” book but is an outstanding starting point for an adventure into Japanese-style gardens.