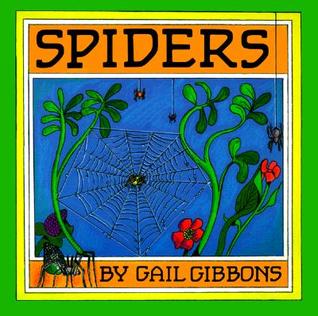 Not the most popular animal, spiders are residents of the garden and contribute in many ways. Children and adults alike are often frightened by these critters and kill them unnecessarily. Gail Gibbons book, Spiders, is a valuable resource for educating young readers and helping them to turn fear into respect. Written for children ages five to eight it presents spiders in a positive light and adds to an appreciate of their attributes.

Gibbons presents a wealth of information that is sure to interest everyone and add to their knowledge of spiders. She sets the tone for the book at the beginning by saying that although spiders look scary most don’t hurt people. A bit of history and mythology is followed by a comparison of an insect and spider with large labeled diagrams illustrating the differences in their anatomy. The life cycle of a spider is shown including formation of the egg sac, emergence of spiderlings, ballooning, and molting. One of the highlights of the book is the presentation of different kinds of webs; tangled, sheet, funnel, triangle, and the most beautiful, the orb web. Of course, not all spiders use webs for catching food and we are introduced to the wolf spider, water spider, trapdoor spider, and crab spider. The black widow spider gets coverage including the fact that its poison can kill a person but the accompanying illustration does not show the spider in enough detail to help identify it in nature. The fearsome-looking tarantula native to the United States is shown with the comments that it is not poisonous to people and females can live up to twenty five years. Is there pet potential here? The book concludes by noting that spiders are important because they eat many harmful insects and are worthy of study. A final page presents interesting facts not covered in the text. Did you know that spider silk is three times stronger than steel thread the same thickness? Or that mashed spiders were used two hundred years ago as a cold remedy?

The text is simple and easy to read with pictures that illustrate all the concepts covered. Deep blue and green backgrounds with bright colored flowers make every picture appealing as well as informative. Whether you like spiders or not you will feel more kindly towards them after reading this book. It is a great introduction to the topic and resource for young readers.