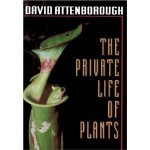 Do you believe that plants can see, count, communicate, react to touch, and estimate time? David Attenborough’s book, The Private Life of Plants will make you into a believer. According to Attenborough, plants face many of the same basic problems as animals and solve them, but on a different time scale than animals. Through advances in film and video technology the behavior of plants can now be studied, and Attenborough presents some of the new ideas that have come out of these investigations giving a fresh look at the natural world from the point of view of plants.

The book is divided into six chapters each dealing with a different aspect of plant life; travelling, feeding and growing, flowering, social struggle, living together and surviving. In each chapter the author uses abundant examples from the common place to the usual to illustrate his points, provided a plethora of pictures throughout the book. Anyone that gardens knows that plants especially weeds travel, but did you know about the Mediterranean squirting cucumber that fills its seed-pods with liquid so that it can shoot out its seeds with such force that they travel up to 20 feet from where they start and grow new colonies? Animals and plants are closely associated in their pursuit of life and Attenborough explores many of these relationships. We learn how the leaf-folding caterpillar makes a safe dining-room for itself in the rainforests of Borneo by cutting the leaf to form a hinge that is used to fold part of the leaf over itself.

The photographs included in the chapters are incredible. We see the hawkmoth with its coiled tongue used to capture the nectar from the depths of a Madagascan orchid, a tiny arrow poison frog in a bromeliad, and fungal puff balls that are 30 pounds and 18” in diameter. Photographs of a honey possum on a giant banksia in West Australia and a thread of fungus capturing an eel worm illustrate the close relationships that exist between plants and animals.

If you want to see and understand the unique world of plants, Attenborough’s classic book is a wonderful way to start. First published in 1995 and based on the six part BBC program, it is written in a conversational style and uses no scientific jargon. Plant and animal names are simplified so that they are descriptive and meaningful, but more scientific names are available in the index for those that want them. The book includes so many unique examples with both photographs and text that there is something of interest to anyone who likes the natural world. This is the kind of book that would be a great resource for introducing children to the wonders of plants and animals.

To buy The Private Life of Plants from Amazon.com click here

Previous post: Interesting Facts about Spider Mites as an Aid in Control