Foliage can add both texture and color to the landscape to create a mood and enrich the visual quality of the garden.  Leaves may be glossy, matte, large, small, leathery, prickly, or hairy and add interest through contrast.  Leaves also vary greatly in color from pale green to kelly to olive green and others may be silver or variegated with yellow or white so can brighten a dark spot or tone down a bright one.  Both color and texture can be used to create contrast,  patterns, and variety all of which enhance to the garden experience.

When choosing annuals and perennials for the garden their cultural requirements have to be considered.  One of the most important of these is the need for water.  Plants greatly vary greatly in their need for water and using drought tolerant trees and shrub can significantly curb water consumption.  Here is a list of drought tolerant perennials and annuals grown primarily for their foliage. 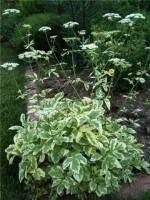 Also called goutweed, this herbaceous perennial is native to Eurasia and has been introduced into the US where it is often used as a ground cover. Rhizomes produce erect, hollow, grooved stems eight to twelve inches tall and ivy-shaped leaves that quickly form dense mounds. The three inch long leaves are light green in the center with cream variegation on the edges and have serrated margins. The small cream colored flowers are produced in umbels on long slender stems well above the foliage from late spring to early summer. They can be used as cut flowers and are excellent for craft projects when dried and pressed, but are often removed in order to control the spread of the plants by seeds and/or to maintain the attractiveness of the plant as a ground cover. If the foliage becomes unattractive in the summer the plants can be mowed at a high setting to stimulate new growth. Although the foliage is very attractive the plant should be used only with extreme caution as it is very invasive if it likes the site and is difficult to control.

Known by many common names including western mugwort, Louisiana wormwood, and white sagebrush, this rhizomatous perennial is a native of North America including most of the US. The white hairy stems are branched and carry aromatic silvery leaves two to four inches long, with white woolly undersides and almost hairless topsides. The margins of the leaves are entire rather than dissected like most other artemesias. The small nodding flower heads are yellowish gray and carried in narrow compound panicles in late summer. They are not considered ornamentally attractive and are usually removed as they appear. Although the foliage is very attractive and can be an asset in the garden, the plants tend to spread aggressively by seed and rhizomes and may need to be restrained. A good choice, however, for a sunny, dry difficult area where little else thrives. 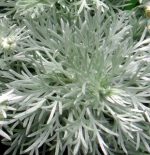 Silver mound is a semi-evergreen perennial native to Japan. The species is rarely seen but the cultivar ‘Nana’ is a popular garden plant. ‘Nana’ is slightly smaller than the species and forms a dense mound of finely divided silver-gray leaves that are so tightly packed on the stem that they appear to be in rosettes. The nodding yellow flower heads of both the species and ‘Nana’ are produced in panicles in late summer but are not ornamentally attractive.  Plants are useful in containers, as well as in cottage, informal,  and rock gardens.  They tend to melt out in the heat of summers and benefit from a light clipping to remove flowers as they appear.

lso known as beach wormwood, and old woman, this evergreen perennial or subshrub is native to China, Korea, Siberia, and Japan where it grows in sandy soil, including sand dunes and coastal cliffs. The aromatic, coarsely lobed leaves are three to four inches long and are densely covered in white silky hairs. The yellow flower heads are ¼” wide and appear in late summer in dense narrow panicles but are not considered ornamentally attractive. Plants are salt and drought tolerant so are especially useful in maritime gardens. This species is the least inclined Artemesia to rot in humid conditions.  The foliage can be used in dried arrangements.

Also known as summer cypress, this this half-hardy annual often grown as a shrub,  is native to  central and southern Europe and Asia but was introduced into the US in the mid to late 1800s as an ornamental and has become weedy or invasive in some areas. The plants have a deep taproot, red-tinged stem, and narrowly ovate leaves that are up to 2″ long  and have 1-5 prominent veins and entire margins fringed with hairs.   The leaves are pale green in the summer and turn bright red in the fall, giving rise to the common name burning bush. In summer, inconspicuous flowers are carried in axillary or terminal spikes and consist of reproductive structures and green leaf-like bracts surrounded by tufts of hair. When the plants die they break off from the base and become tumbleweed. Plants are tolerant of heat, drought, and salt and are a good choice for a hedge, parterre edger, groundcover, erosion control, seaside garden, or as an accent plant. 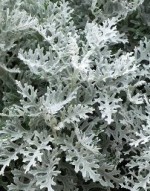 Dusty miller is a half-hardy perennial native to the Mediterranean area.  It grows 12-24″ tall and has silver-gray woolly leaves up to 6″ long that are lobed or deeply incised so as to give a lacy appearance that sets off the appearance of other plants to advantage. In summer, small mustard yellow daisy-like flowerheads appear beginning in the second year. Considered a subshrub, dusty miller is usually grown as an annual in cool areas but often returns in USDA Zone 7 and warmer. Dusty miller likes warm temperatures and a dry climate but it also does very well in the heat and humidity. It is a good container plant but is most often seen as a edging plant and has been over used at times. The foliage as useful in a vase arrangement as it is in the garden.

Also known as Spanish bayonet, spoon-leaf yucca, needle-palm, and silk-grass, Adam’s needle is a clump-forming evergreen perennial and is native to southeastern US from southeast Virginia south to Florida and west southwest Texas where it grows in a variety of habitats including rocky slopes, fields, and dunes.    The  spine-tipped, sword-like, gray green leaves are 1.5-2.5 long and are edged with curling fibers.  In early to mid summer, creamy white, 2″ long,  bell-shaped flowers appear in panicles that are 6-10′ tall but can be taller.  The flowers sometimes are flushed with reddish brown.  Adam’s needle is drought resistant and can add a dramatic architectural element to the garden, especially valuable in a xeriscape. 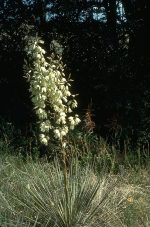 Native to dry rocky soils of central US and Canada, this evergreen herbaceous perennial has many common names including beargrass, Great Plains yucca, narrowleaf yucca, and Spanish bayonet.  Growing from a deep taproot, the plants form a large basal rosette of  gray-green to blue-green leaves that are one-half inch wide, 12-18” long, and have sharp pointed tips and pale gray-green margins and threads.  In summer waxy bell-shaped flowers appear on slender racemes up to 3′ long.  The pendant flowers are  2″ long, fragrant, greenish-white flushed with red, and are atractive to butterflies.  Because plants do not bloom every year they are best planted in clusters, although the foliage is very ornamental.  Soapwort is a striking architectural plant in borders and  provides food, cover, and nesting sites for wildlife.  It is very drought tolerant and a good choice for a desert garden or xeriscape.