Dry shade is one of the most difficult sites for growing plants.  Whether it is on a hill side,  under the eves of a house, or under trees where roots compete for water,  dry shade presents challenges for plants because of the lack of water.  Although not an ideal site for any plant, some plants do survive in dry shade especially if the soil is first amended and they are watered faithfully until they become established which is usually about a year.  Even after that, occassional waterings may be needed, especially during times of drought.

Also known as arrow-leaf wild ginger,  heartleaf wild ginger is native to dry to mesic woodlands and forests of woutheastern US.  It is not a true ginger but gets its common name from the fact that its rhizomes taste and smell like ginger root when crushed or bruised.  Plants grow 6-8″ tall and have glossy blue-green, heart-shaped leaves that up to 5″ long, scented, and patterned with silver  or gray markings.  In spring,  purple to brown, urn-shaped flowers appear under the leaves on the ends of rhizomes.  Plants are slow growing but eventually cover a large area and are an excellent choice as a ground cover.

Bloom: Brown to purple urn-shaped flowers under th eleaves at the ends of rhizomes, in spring

Native to  mountain woodlands of northern Africa, bishop’s hat grows up to 12″ high and slowly grows by rhizomes into a clump up to 18″ wide. The compound leaves are carried on wiry stems and have three glossy oval leaflets  up to 3″ long and with spiny margins.  The leaftlets are tinted bronze when young but turn green with age.  In spring up to 25 yellow flowers appear in clusters just above the foliage.  The flowers are up to 3/4″ across and have short bronze spurs.  Plants are drought tolerant once established and do well in the shade as ground covers, edgers, and in rock and woodland gardens.   Other common names include barrenwort, bishop’s mitre and fairy wings but these names are also applied to other plants.

Bloom: Clusters of up to 25 yellow flowers 3/4″ across in spring

Native to the woodlands of Europe, Turkey and the Caucasus, this bushy plant  grows 18-24″ tall and slowly forms rounded mounds up to 18″ across.  The leaves  are slightly hairy, up to 2 ” long, and are alternate on the lower stem but in whorls on the upper stems. They are  shiny dark green during the growing season but take on a purplish  red color hue when temperatures become cooler in fall. From late spring to early summer  large sprays of small chartreuse yellow flowers appear subtended by yellow-green disc-like bracts. The flowers lack petals and sepals but the bracts are showy and last for months.  Plants grow well in full sun to part shade and moist to dry soils so are especially valuable as ground cover  under trees and in beds, borders and rock gardens.  The flowering stems are attractive in flower arrangements.

This climbing vine  is native to most of Europe and western Asia where it grows in waste spaces and on walls and tree trunks.  Growing up to 98’ long, it produces aerial rootlets with matted pads that cling tightly to various surfaces. The dark green leaves are waxy and have conspicuous white veins. Young leaves are palmately five-lobed while older leaves on flowering stems in full sun are unlobed and cordate. The small greenish-yellow flowers are produced in umbels up to 2” wide from late summer to late fall and are followed by .3” wide black-purple fruits attractive to wildlife. English ivy is considered invasive in many areas and can do serious damage to stucco, wood, brick mortar, and aluminum siding.  It is tolerant of shade and dry conditions so makes a good ground cover in difficult sites and is also attractive growing on trellis, fences, and walls.  Many cultivars are available that are less vigorous than the species and make excellent houseplants and topiary.

Height: Up to 98′ when grown outside

Also known as  gladdon, Gladwin iris, and roast-beef plant, this rhizomatous, beardless iris is  native to northern Africa and Europe where it grows in open woods, sea cliffs, and shady places.   Plants grow 1.5 to 2′ tall and have dark green sword-like leaves up to 24″ long.  In late spring pale lavender flowers appear on 10-24″ scapes and give way  to seedpods that break open in the fall to reveal clusters of bright coral seeds that persist into winter.  The seeds are not attractive to birds but the seeds in their pods are very desirable for dried arrangements.  Plants are grown primarily for their attractive seed pods and foliage, but the seed pods may not appear until the 2nd or 3rd year.  This iris is especially shade tolerant and is a good choice for a shade garden especially among shrubs.

Native to China, Korea, and Japan, turf lily grows as an understory plant in shady forests.  Reaching  12-18″ tall it spreads slowly by short rhzomes  to form clumps up to 12″ wide.   The dark green leaves  are 1.5″ wide, arching, and grass-like.  In late summer showy spikes of lavender-blue flowers appear in  densely packed whorls above the foliage.  In fall the flowers give way to black-purple berries which often persit into winter.  Cultivars are availabe that vary most signficantly in leaf color  and size which creates various textures that add interest to any planting making turf lily a good chioce for edings, rock and woodland gardens, as well as in containers.  Turf lily is drought, heat, humidity and shade tolerant and is greatly valued as a ground cover especially for shady areas.

Also called carpet box, this this spurge is native to Japan and north-central China.   It grows 8-12″ tall from a rhizomateous root system and slowly spreads to form dense stands up to 24″ across.  The oval, 2-4″ long leaves appear in whorls at the ends of the stems and are glossy dark green but may yellow in winter or in direct sunlight.   In early spring, 1-2″ long terminal spikes of tiny white flowers appear above the foliage.  The plants are especially valued  in shady areas as ground covers under trees, and in foundation plantings.

Christmas fern is native to eastern North America from Florida and eastern Texas north to Nova Scotia and west to Minnesota where it grows in shady woodlands, stream banks, and rocky slopes.    It grows 1-2′ tall and slowly forms clumps of about 20 fronds and 1-2″ wide.   The fronds are coiled and have white scales when they emerge as crosiers in early spring but are  leathery, dark green and  12-32″ long when mature.  Each frond is supported by a dark brown to black stem-like structure (stipe) that carried  20-35 pairs of leaflet-like pinnae that are up to 2″ long and have a thumb-like lobe at the top and fine double toothed (serrulate) margins.   Groups of brown spores (sori) almost cover the underside of the pinnae in the upper 1/3 to 1/2  of the fertile fronds.  Fertile fronds are longer than sterile fronds and die back in the winter.  Plants are tolerant of drought and shade and are a good choice for woodland and shade gardens as well as for erosion control. 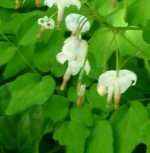 lso known as redwood ivy, this  native of northwestern California and southwestern Oregon grows in coastal forests, especially redwood forests.  The plants grow up to 12″ tall from a rhizomatious root system and form a clump of leathery, glossy dark green compound leaves with 3 or 5 round to heart-shaped leaflets up to 1.5″ long and wide,  on long reddish petioles.  In winter the leaves may take on a purplish to red color.  The small pendent flowers appear in upright clusters of 20-50 in late spring to early summer. Each flower has 6 petal-like sepals that are white and reflexed, and 6 smaller white petals that are sometimes tinged with lavender.  Although the plants prefer moist soils in the shade, they tolerate dry soil and are a good choice for a ground cover or in woodland, native plant, or shade gardens. 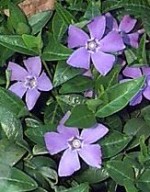 Also called myrtle, this vine is native from central and southern Europe to the Baltic States and southwestern Asia in Turkey where it grows in fields and woodland edges. Non-flowering stems root at all the nodes so that it quickly spreads to form a dense low growing mat.  The glossy, dark green leaves are leathery and up to 1.5″ long. Bright blue tubular flowers are  .75-1” across and are born in spring and sometime sporadically in summer and fall.  White and purple flowered cultivars and varieties are available.   Although periwinkle prefers moist conditions it does well in dry soil and is a good choice as a ground cover and  for controlling erosion.   Its cascading nature is particularly attractive in window boxes and other containers.

Bloom: Tubular bright blue flowers up to 1″ across in spring and sometimes sporadically in summer and fall