Points to Ponder when Selecting Peonies

There is no flower more nostalgic than the big beautiful blossoms that cover herbaceous peony bushes in spring. They are fabulous in the garden, a vase, and bridal bouquets. Their colors, forms, and texture make them eye catchers in any situation and their foliage adds beauty to the border throughout almost all the gardening season. They require little care once established and will live and bloom for many years. With over 900 cultivars for sale in the US there are enough choices to fit almost every want or need. Here are some characteristics to consider when buying peonies.

Color is probably the characteristic that tops the list of most people. Pink is the color that usually comes to mind when I first think of peonies with white or dark red close behind. But if you look closely many pink, red or white peonies also have large, numerous, conspicuous yellow stamens.

There are peonies that are completely yellow. 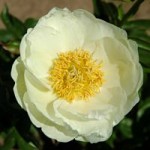 A few peonies are lilac. 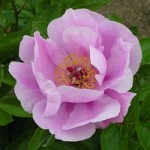 A new color in peonies is coral.

Some peonies are two shades of the same color.

A few peonies have petals with contrasting colors. 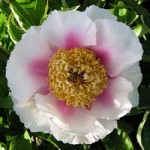 Some peony bushes will bear flowers of two different colors on the same bush.

You may have noticed that the peonies shown above have vastly different number of petal or petal-like structures. Peonies have been divided into 5 different forms.

a. Single is the simplest form. Five or more petals are arranged in a single row around a center of pollen bearing stamens

b. Semi double: Five or more wide petal arranged around a center of pollen bearing stamens mixed with petals.

c. Japanese: Five or more petals around a center consisting of wide stamens that have no pollen (stamenoides).

Example: ‘Tourangelle’ (apple-blossom pink with cream-white shading at the base, double, 36” tall, midseason)

If the outer petals around a center of smaller petals forms a mound this flower is said to be a bomb type double.

3. Fragrance: Some peonies have it and some don’t and those that do vary in the type of scent and include: 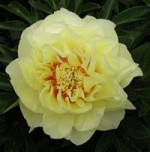 4. Stem Strength: if you hate to stake this characteristic could be important.

No need for staking

6. Time of Bloom: The exact time of bloom is dependent on your location so the bloom time is a relative. Most are midseason.

Late 94-6 weeks later than the early ones)

7. Height: Most peonies vary in height from short to tall, with most somewhere in between. 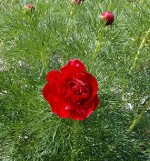 9. Chill Requirement: Most peonies require a certain number of chilling hours to break dormancy, grow and flower but some are tolerant of moderate zone 8 winters. 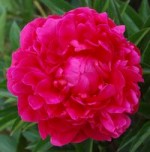 Many combinations of characteristics are available so do not be restricted by the peonies shown above. Your local nursery will probably have a very narrow range of choices but on line sources have many, many more.  All of the peonies I have used to illustrate various characteristics are available on line at such places as at www.peonyparadise.com.  Order for fall planting.