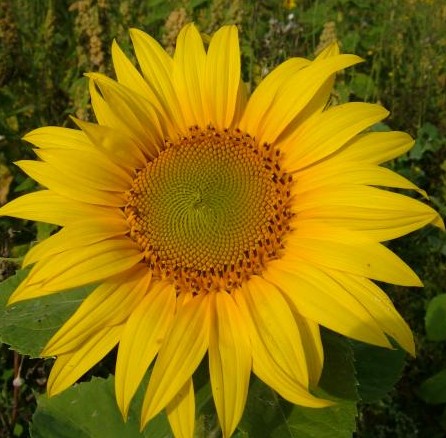 Sunflowers are annuals native to North American but introduced into Europe in the sixteenth century by the Spanish. They are now widely grown for their oil and seeds. Sunflowers belong to the aster family (Asteraceae) known for their compact inflorescences. The flowerhead of a sunflower consists of outer ray flowers/florets that are sterile and resemble petals. The inner part of the flowerhead is composed of disc flowers that form the seeds when fertilized. The disc flowers are arranged in the interconnecting spiral pattern of a Fibonacci series. The generic name, Helianthus, comes from the Green helios meaning sun, and anthos meaning flower, and may refer to the resemblance of the flowerhead to the sun or the mistaken idea that the flowerhead turns with the daily movement of the sun.

The consumption of the seeds and the oil derived from them is well known but the stalk, leaves, and petals of the plant are also edible. The petals have a grass-like taste with a hint of bitterness and are tasty in soups, salads, bread, and beverages. The unopened buds, however, are a gourmet treat as they taste like steamed artichokes.

Sunflower flowerhead are usually available from midsummer through fall. The petals (ray flowers) should be removed from the flower head and carefully washed to remove the pollen that is highly allergenic. The white base of each petal should also be removed because it is very bitter. When using the unopened buds, remove the calyx underneath the flowerhead. Two to four flowers yields one cup of petals.