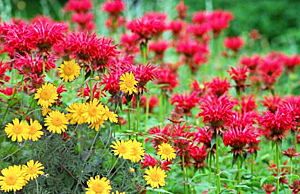 A pleasing color combination of red and yellow plus a contrast in flower shape makes this combination a great addition to the sunny border in summer. Golden Marguerite begins to bloom in late spring and remains in flower until fall. Cambridge Scarlet joins the scene as summer rolls in and continues to bloom for eight weeks if deadheaded. Both plants like full sun and can do well in medium moist soil. Golden Marguerite is drought tolerant but ‘Cambridge Scarlet’ must not be allowed dry out. Both plants are short lived and susceptible to mildew so profit from good air circulation.

Beebalm is a native perennial of eastern United States where it is found in moist sites such as lowlands and the banks of waterways. The stems are four sided and bear 4-6” long, aromatic leaves and dense terminal clusters of whorled flowers subtended by showy bracts. The plants are prone to mildew and should be grown so that the air circulation is good and they are not stressed by lack of moisture. They spread by both seed and rhizomes and can become invasive in if conditions suit them. ‘Cambridge Scarlet’ is bright scarlet and a very vigorous cultivar.

Also known as ox-eye chamomile, golden Marguerita is a native perennial of Europe and North Africa. The bright yellow daisy-like flowers are 1 ½” across and profusely produced on erect bushy plants with strong stems and finely dissected pinnate leaves. Sometimes the plant is so floriferous it wears itself out but can be rejuvenated by shearing it severely to promote new basal growth.  Several good cultivars are available varying is size and color;  Grallagh Gold’ (Beauty of Grallagh) 2′ tall and with yellow orange flowers is one of the best.