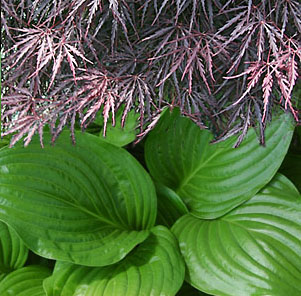 This medium sized hosta grows into a wide mound about two feet high. The corrugated leaves are nine inches long by 5 inches wide and develop a yellow green color when grown in enough sun. The flowers are tubular and borne on scapes more than a foot above the foliage. Slugs can be a problem.

The finely cut leaves of this heirloom cultivar hold their purple-red color well making it especially valuable for this combination. The tree is slow growing and has burgundy twigs and young branches. In spring before the foliage leafs out, small reddish flowers are produced and are followed by samaras that ripen in late summer to early fall.