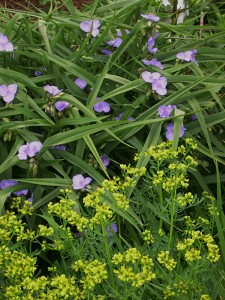 For late spring into summer the blue flowers of spiderwort and the yellow flowers of rue are especially pleasing in a perennial grouping. The spiderwort can bloom for up to eight weeks and may start before the rue but its blue color is echoed in the blue tint to rue’s foliage even before the rue’s yellow blooms enter the scene. Both flowers and foliage contrast in shape and texture. The blue of the rue’s foliage will continue to add color to the garden all season as the spiderwort regroups to produce a possible second bloom in late summer. Both plants flourish in full sun and moist but well-drained soil.

Spiderwort (Tradescantia x andersoniana aka T. virginiana)
The flowers are produced in terminal umbels. Flowers in each umbel open a few at a time and for only one day so the bloom period extends for a long time. The leaves are linear and get ratty after blooming ceases. Cut back to 8-12” and the foliage will quickly reappear often with flower bearing stems for a rebloom. When growing in favorable conditions, spiderwort can reseed.

Rue (Ruta graveolens)
Known from European monastery gardens in the Middle Ages for its herbal qualities, rue is considered a semi-shrub which means that it becomes woody at the base but dies down in winter. The small yellow flowers are delicate and borne in clusters. Many gardeners grow rue just for the foliage which is aromatic, finely divided and bluish-green. ‘Jackman’s Blue’ is an especially handsome cultivar with pale yellow flowers and glaucous blue foliage that has a cooling effect on hot colors such as red.