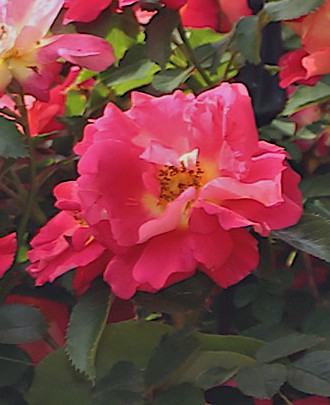 Best in Show 2014 Miracle on the Hudson

Biltmore International Rose Trials, held at the Biltmore Estate in Asheville, North Carolina are the first international trials on the East Coast and one of two in the whole US. The other is in Rose Hills, Whittier, California. Most international rose trials are held in Europe and are a common occurrence with trials held in twenty different locations in fifteen countries.

The trials are open to breeders and growers worldwide and last two years. The roses are judged four times a year by a permanent jury and rated on the over all bush, not just the flowers, in regard to growth habit and vigor, buds and flowers, recurrent bloom, resistance to disease, and fragrance. Biltmore rosarian, Lucas Jack, oversees the care of the trial roses and employs sustainable care methods that home gardeners can duplicate.

The trials began in 2011 with the planting of the first roses. In 2013 awards were presented to this first trial group on the basis of two years of judging. Roses planted in 2012 were given awards in 2014 and more trials, judging, and awards are anticipated. Awards are given in several categories including most disease resistant, best growth habit, most fragrant, best shrub rose, best hybrid tea, best climber, best floribunda, best groundcover, best established rose, and most outstanding rose of the trials. The most outstanding rose of the 2013 trials was ATHYfalaa bred by Mike Athy of New Zealand. This rose also was also given awards for most disease resistant, best growth habit, and best climber. The most outstanding rose of the 2014 rose trials was ‘Miracle on the Hudson’ bred by Robert Neil Rippetoe of California. This rose also won awards for best shrub rose, best growth habit, and best disease resistance.