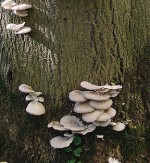 The common oyster mushroom grows in subtropical and temperate deciduous forests throughout the world but is also widely cultivated. It is saprophytic and appears from fall to winter growing in large compact tiers on stumps, logs, and dying trees especially elm and beech. The fan-like fleshy cap is ¾ to 8 inches across and varies in color from cream to gray, yellowish, or black. It has a smooth, shiny surface and inrolled wavy margin. The cream colored gills are crowded and run down the very short thick stem when it is present. The spores are very pale, lilac gray.

Because of their delicate aroma, mild anise flavor and tender texture when young, common oyster mushrooms are considered choice. The mushrooms should be cleaned with a brush or damp cloth, stems removed for the stock pot. The caps can be cooked in a variety of ways including stir-fry and saute to go with meats and fish or can be used in soups, stews, or sauces. When collecting mushrooms in the wild, seek expert advice on identification before eating them.

Next post: Plants of the Bible: Apricot (Prunus armeniaca)