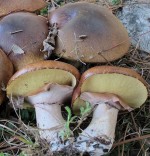 Native to Euraisa, slippery jack has been introduced to North America as well as other elsewhere in the world and is found growing in clumps under conifers, especially pines, where it forms symbiotic ectomychorrhizal associations with trees that fosters the growth of both. It is a bolete fungus with characteristic tubes and pores rather than gills. The mushroom grows 2.5 to 5 inches tall with a cap that is 2 to 4.5 inches across. The cap is thick, fleshy, slimy, usually dark brown, occasionally yellow, and is sometimes streaked. It is rounded or conical at first but flattens out with maturity. The tubes are golden to tan, the pores bright yellow, and the spores ochre brown, The stem is thick and firm and has red dots at the top that fade to yellow, and a distinctive membranous ring that develops a brown to violet color hat fades to pale yellow.

Slippery Jack is edible but not considered one of the better boletes because of its indistinct flavor. The large size of the cap and the firmness of the flesh when young, however, are points in its favor. It is used in strews, soups, and fried dishes and is also dried and pickled. To avoid digestive problems the slimy tissue on the cap should be removed, an easy procedure.

NB When collecting mushrooms in the wild seek expert opinion about edibility before eating to avoid problems.

Next post: Plants of the Bible: Calamus (Acornus calamus)