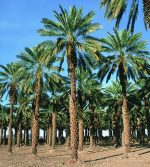 Date palm is a tender evergreen tree that probably orginated in the Fertile Crescent and has been cultivated since 7,000 BC.   It is a member of the palm family, Arecaceae, that also includes cocunut and palmettos.  The trees grow up to 75′ tall and has one to several stems carrying pinnately compound leaves are 13-20′ long and have spines on the petiole and up to 150 leaflets that are up to 12″ long. The leaves are produced at the stop of the stems and form a crown that is 20-33′ across.   Spikes of small white  male and female flowers are produced in the axils of the leaves on different plants and fertilized female flowers give way to yellow to red, oval  fruits that are 1-3″ long and very sweet.  Date palms are grown as street trees as well as for shade and fruit, and may be grown in a container as apatio or house plant.  The genus name, Phoenix, was the classical Greek name for the plant.  The specific epithet, dactylifera, comes from the Greek word dactylos meaning finger, and the Latin word ferre meaning to carry, and refers to the finger-like appearance of the leaves. Photo Credit Wiktionary

Dates have been a source of food in the Middle East for thousands of years.  The ancient Egyptians used the fruit for making wine and the ancient Hebrews used it for  wine, vinegar, bread, and cakes  In addition, the stones were used for fodder, the wood for construction, and the leaves for making a large number of items from baskets and furniture to shelters. The ancient Romans planted date palms in their peristyle gardens as ornamentals and used palm leaves in trimphal processions.

Exodus 15.27 (KJV) When the Israelites left Egypt they wandered for three days in the wilderness without water and finally came to an oasis.

“And they [the Israelites] came to Elim, where were twelve wells of water, and threescore and ten palm trees: and they encamped there by the waters.”

Leviticus 23. 40 (KJV) The Lord told Moses how the Hebrews were to prepare for the Feast of the Tabernacles.

Numbers 33.9 (KJV)When the Israelites left Egypt they wandered for three days in the wilderness without water and finally came to an oasis.

“And they removed from Marah, and came unto Elim: and in Elim were twelve fountains of water, and threescore and ten palm trees; and they pitched there.

Deuteronomy 34.3 (KJV) Moses views the land of Canaan just before he dies.

“And the south, and the plain of the valley of Jericho, the city of palm trees, unto Zoar.”

The Book of Judges deals with the history of Israel from the conquest of Canaan  and describes their travails as they were punished by God for disobedience and saved by the leadership of various judges.

1.16 (KJV)The city of palm trees is probably Jericho and its territory.

“And the children of the Kenite, Moses’ father in law, went up out of the city of palm trees with the children of Judah into the wilderness of Judah, which lieth in the south of Arad; and they went and dwelt among the people.”

3.13 (KJV) God strengthened Eglon the king of Moab against Israel who then went on to take Jericho, city of palms (and the area areound it)

“And he [Eglon] gathered unto him the children of Ammon and Amalek, and went and smote Israel, and possessed the city of palm trees.”

4.5 (KJV) During the oppression of Sisera, the Israelites seek help from Deborah.

“And she [Deborah] dwelt under the palm tree of Deborah between Ramah and Bethel in mount Ephraim: and the children of Israel came up to her for judgment.”

“And he carved all the walls of the house round about with carved figures of cherubims and palm trees and open flowers, within and without.”

“The two doors also were of olive tree; and he carved upon them carvings of cherubims and palm trees and open flowers, and overlaid them with gold, and spread gold upon the cherubims, and upon the palm trees.”

“For on the plates of the ledges thereof, and on the borders thereof, he graved cherubims, lions, and palm trees, according to the proportion of every one, and additions round about.”

“And the greater house he cieled with fir tree, which he overlaid with fine gold, and set thereon palm trees and chains.”

Nehemiah 8.15 (KJV) The Lord told Moses how the Hebrews were to prepare for the Feast of the Tabernacles (See Leviticus 23.40 above.)

Song of Songs 7.7-8 (KJV) The bridegroom addresses his bride.

7.“This thy stature is like to a palm tree, and thy breasts to clusters of grapes.”

8. “I said, I will go up to the palm tree, I will take hold of the boughs thereof: now also thy breasts shall be as clusters of the vine, and the smell of thy nose like apples;”

Jeremiah 10.5 (KJV) The prophet warns about idol worshipers
“They are upright as the palm tree, but speak not: they must needs be borne, because they cannot go. Be not afraid of them; for they cannot do evil, neither also is it in them to do good.”
Ezekiel 40 (KJV) The prophet describes a temple.

16. “And there were narrow windows to the little chambers, and to their posts within the gate round about, and likewise to the arches: and windows were round about inward: and upon each post were palm trees.”

22. “And their windows, and their arches, and their palm trees, were after the measure of the gate that looketh toward the east; and they went up unto it by seven steps; and the arches thereof were before them.”

26. “And there were seven steps to go up to it, and the arches thereof were before them: and it had palm trees, one on this side, and another on that side, upon the posts thereof.”

31.” And the arches thereof were toward the utter court; and palm trees were upon the posts thereof: and the going up to it had eight steps.”

34. “And the arches thereof were toward the outward court; and palm trees were upon the posts thereof, on this side, and on that side: and the going up to it had eight steps.”

Ezekiel 41 The description of the temple continues.

18 “And it was made with cherubims and palm trees, so that a palm tree was between a cherub and a cherub; and every cherub had two faces;”

20. “From the ground unto above the door were cherubims and palm trees made, and on the wall of the temple.”

25. “And there were made on them, on the doors of the temple, cherubims and palm trees, like as were made upon the walls; and there were thick planks upon the face of the porch without.”

26. “And there were narrow windows and palm trees on the one side and on the other side, on the sides of the porch, and upon the side chambers of the house, and thick planks.

Joel 1.12 (KJV) The prophet describes the devastation caused by a locust plague and drought in an effort to have the people repent of their sins.

“The vine is dried up, and the fig tree languisheth; the pomegranate tree, the palm tree also, and the apple tree,even all the trees of the field, are withered: because joy is withered away from the sons of men.”

John 12.13 (KJV) The triumphal entry of Jesus into Jeruselem is described.  Althouh the translation reads “branches of palm trees”, leaves are meant as date palms have no branches, botanically speking.

“ [the people]Took branches of palm trees, and went forth to meet him, and cried, Hosanna: Blessed is the King of Israel that cometh in the name of the Lord.”

Revelation 7.9 (KJV) The great multitude that stood before the Lamb in the heavenly Jerusalem is described.

“After this I beheld, and, lo, a great multitude, which no man could number, of all nations, and kindreds, and people, and tongues, stood before the throne, and before the Lamb, clothed with white robes, and palms in their hands;”

Date palms like full sun and average, deep sandy well drained loam with medium moisture and ph 8-11 in USDA  Hardiness Zone 9-11 where summers are long with low humidity, and winters are mild and dry during the flowering and fruiting period.  Propagation is by ofsets or seed.  Plants are susceptible to damage by many pests and diseases.   Date palms are grown as street trees as well as for shade and fruit, and may be grown in a container as a patio or house plant. Male plants are best planted for ornamental purposes while female plants must be planted for fruit production.

The genus name, Phoenix, was the classical Greek name for the plant.  The specific epithet, dactylifera, comes from the Greek word dactylos meaning finger, and the Latin word ferre meaning to carry, and refers to the finger-like appearance of the leaves.