How NOT to prune a mature tree (Tree Topping)

Tree topping is the pruning practice of cutting large limbs off the entire tree to dramatically reduce its size. Because topping has such a destructive, short- and long-term impact on a tree it is very important to understand what is does to the tree before pruning begins. Tree topping is a common practice throughout the United States and is generally done because the property owner fears the large or mature tree creates a hazard. In truth the tree topping creates a more hazardous condition over the long-term.

Removing most of the leaf-bearing branches of a tree (frequently 100 percent) shocks it into rapid growth of multiple sprouts just below the cuts. This growth looks like a “lions tail” at the end of each stump. The new sprouts grow at an accelerated rate, sometimes up to 15 or 20 feet the first year, but unlike normal branches they are growing from bark tissue and are weak attachment points. In addition, because the cuts are made on large branches they do not heal and remain open to insect invasion and decay. Even when young, and especially after a few years of growth, these new branches usually have weak crotch angles and are very prone to breaking during windy conditions. Once a tree has been topped it will never again be as strong as it was before the topping. In essence, topping permanently disfigures a tree and dramatically shortens its life span.

Pollarding, a practice not to be confused with topping, began in midieval times to produce soft shoots for animal feed and basket weaving. Later it developed into the practice of regulating the size and shape of tree species such as sycamore, willow and hornbeam). In pollarding once a tree is established, all sprouts are cut back to the to the same place every year. Pruning is carefully done to avoid wounding the branch collar or leave stubs. Since pollarding requires a significant amount of maintenance it is only found in unique situations where pruning and tree care costs are not an issue. 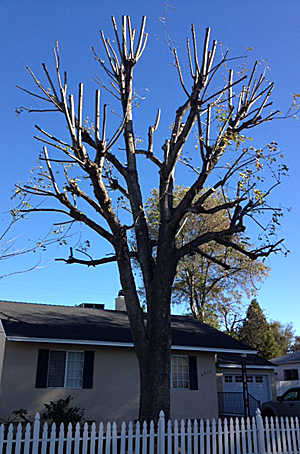 The tree in the photo to the right has been topped twice, the second time by cutting back the sprouts that resulted from the first topping. The wounds haven’t healed from the first topping and the recent butchery has created an even worse situation. This homeowner has permanently destroyed the natural beauty of the tree and greatly increased the hazard of branches falling in the future. Its value has been destroyed and the annual maintenance costs have tremendously increased for the life of the tree. (This example is in Los Angles where tree topping is a common practice.)

Unfortunately, if the reason for topping is to significantly reduce the size of a mature tree there are not any good alternatives. This is frequently the case where height reduction is necessary for utility lines. Some branch removal can be achieved successfully, but when large diameter cuts are required the tree will probably not be able to successfully close over the wound and decay will begin at each cut. When the only alternative is topping the best solution is to remove the tree and replace it with a new one (or a shrub) more appropriate to the size of site.

To learn how to correctly prune your trees see: How to Prune a Deciduous Tree or Shrub.