A member of the water lily family, Nymphaeaceae, this tropical aquatic perennial goes by many names including Egyptian lotus, blue water lily, Cape water lily, frog’s pulpit, and sacred lily of the Nile.  It is native to parts of the Middle East, North Africa along the Nile, parts of eastern and southern Africa, and some of the nearby islands where it grows in freshwater lakes, pools and rivers. The plant grows from a tuberous rhizome and has long spongy green petioles bearing peltate leaves that are 3-17″ long and may float or lie submerged under the surface of the water. The underside has a conspicuous midrib with  lateral veins on each side.  The fragrant flowers are 3-5″ across and appear in mid- to late summer on the surface of the water opening from mid morning until dusk for about 4 days.  Each flower consists of a central cluster of 100-200 stamens surrounded by 14-20 oblong petals that may be blue, white, mauve, or pinkish, and 4 green sepals.   The fruit is a round flattened berry containing seeds with a fleshy bell shaped aril. Photo Credit Wikipedia Commons END_OF_DOCUMENT_TOKEN_TO_BE_REPLACED

Genus: Arenaria for the Garden

Arenaria, often known as sandwort, is a genus of over 210 species of flowering plants in the carnation family, Caryophyllaceae, that also includes, pinks, baby’s breath, and chickweed. The genus includes herbaceous annuals and perennials that are native to northern temperate regions of North America, Central America, Andes of South America, Eurasian mountains, Mediterranean, and Asia Minor. Three species are garden worthy. They form low dense cushions or mats with small, narrow, evergreen leaves and white 5-petaled flowers in spring. Valued as a groundcover in a rock garden, they grow best in average, sandy or loamy, well-drained, neutral to acidic soil, in full to partial shade. Since the plants are shallow-rooted, they need watering during dry spells. The genus name, Arenaria, comes from the Latin word arena, meaning sand, and refers to the soil of the natural habitat of most, but not all, of the plants. Photo Credit Wikipedia

END_OF_DOCUMENT_TOKEN_TO_BE_REPLACED

Also known as canarybird flower, canary bird vine, and canary nasturtium, this tender perennial vine is native to western South America, in Peru and possibly Ecuador.  It belongs to the nasturtium family, Tropaeolaceae, a family of one genus and about 80 herbaceous species.  The plants grow up to 12′ tall and scramble over other plants or garden structures bearing blue-green, shield-shaped, palmately lobed leaves that are rounded and joined in the center to the petiole.  Each leaf is up to 2″ across and deeply divided with 3-7 lobes, usually 5. The bright  yellow, spurred flowers are 1 ” long and  appear in summer.  They consist of  3 small lower petals and 2 larger erect frilled ones that resemble the wings of a canary.  Canary creeper is a good choice for an arbor, trellis, pergola,  wall and border.  The genus name, Tropaeolum, is the diminutive of the Latin word tropaeum meaning trophy.  The specific epithet, peregrinum, is the Latin word meaning foreign or exotic. http://www.karensgardentips.com/sexy-women-to-date/

Wolfbane has a long a interesting history. According to legend aconite grew on the hill where Hercules fought Cerberus, the three headed dog that guarded the underworld. The dog’s spittle fell to the ground and became the poison in the plant that was used by several characters in Greek mythology: Hecate, the Greek goddess of magic arts and spells, to kill her father; Medea in an attempt to poison Theseus; and Athena to turn Arachne into a spider. A Germanic tribe believed that aconite turned them into werewolves for battle and during the Middle Ages witches mixed it with belladonna to make a flying ointment. If the stories are not enough to spark interest, the plants themselves will . They grow up to 3 feet tall and bloom in late summer to fall with long spikes of indigo-blue to dark purple flowers that resemble the hoods of medieval monks, leading to the common name of monkshood and helmet flower. This is a beautiful and fascinating plant but must be grown with caution because of is poisonous nature. 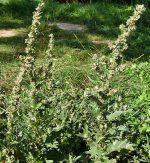 Native to saline and alkaline deserts of  Middle and western Central Asia, Asia Minor, North Africa, and Eastern Europe, this annual shrub is a member of the amaranth family, Amaranthaceae, that also includes spinach, beet, and celosia.  It grows up to 5′ tall,  is much branched and forms a tangled or spreading mass with branches sometimes horizontal on the ground.  The alternate leaves are .6-2″ long, obovate to triangular, and have variable sinuate-dentate margins. Clusters of small inconspicuous male and female flowers are carried on the same plant from mid summer into fall.  The staminate flowers are in terminal, leafless, spike-like inflorescences while 3-20 pistillate flowers are whorled together in the leaf axils.  The leaves and plants are sometimes eaten as emergency food during desperate times and the seeds may be ground and used as a thickener  in bread making.  Plants may be a source of potash and are medicinally useful but are often considered invasive where introduced.  The genus name, Atriplex, is the Greek name for orach, a related plant that can be used as spinach.  The specific epithet, tatarica, is the new Latin word meaning of Central Asia, and refers to the geographic distribution of the plant. http://www.karensgardentips.com/free-muslim-dating-sites-uk/

Also known as scouring rush, this is a herbaceous perennial that bears spores rather than seeds and is more closely related to ferns than to seed bearing or flowering plants.  Is is native to North America from Newfoundland west to Alaska and south to Georgia, Alabama, Texas, and California where it grows in a variety of habitats including damp and open woodlands, pastures, fields, meadows, swamps, disturbed sites, and near the edges of streams. Growing from branched creeping rhizomes that can penetrate the soil over six feet deep, common horsetail produces two distinct types of stems; fertile and sterile. The fertile stems appear in mid-spring and are two to twelve inches tall.  They are tan, unbranched, and terminate in a cone -like structure that resembles a morel and carries the spores.  It is up to 1 1/4 inches long, light brown, oblong, and rounded at the tip.  After releasing their spores, the fertile stems wither away.  The sterile stems appear from mid-spring to mid-summer and persist into fall.  They are green, jointed, hollow, from two to twenty four inches long and carry up to twenty whorls of scale like, inconspicuous leaves  at each node on at least the upper two-thirds of their length. Plants spread primarily by rhizomes, may become weedy and invasive, and are extremely hard to eradicate. Both fertile and infertile stems are attractive in a bog garden but should be enclosed in a container to prevent unwanted spread. The genus name, Equisetum, comes from the Latin words equus, meaning horse, and seta meaning bristle, and refers to the resemblance of the infertile stems to the tail of a horse. The specific epithet, arvense, is from the Latin word arvum, meaning plouged, and refers to the growth of the plant in arable soil or disturbed areas. Photo Credit MPF Wikimedia

END_OF_DOCUMENT_TOKEN_TO_BE_REPLACED

lso known as salvia cistus and Gallipoli rose, this bushy evergreen shrub is  native to the Mediterranean region, including southern Europe, parts of Western Asia and North Africa. It is a member of the Cistaceae family, a small group of shrubs and semi shrubs that do well in dry, sunny locations with poor soil. Plants grow 12-24″ tall and have oval, gray- green leaves that are .4-1.5″  long, wrinkled and covered with woolly matted hairs.  The flowers appear from spring into summer, are 1.5-2.4″ wide, and have  orange yellow stamens in the center surrounded by  5 white petals with a yellow spot at the base. The flowers are very attractive to bees.  The whole plant is covered with a sticky fragrant resin.  Photo Credit  ghislain Wikipedia END_OF_DOCUMENT_TOKEN_TO_BE_REPLACED

Scotch broom is a deciduous flowering shrub and member of the pea family, Fabaceae that also includes alfalfa, mimosa, and black locust. It is native to northern Africa and western and central Europe but was introduced to the East coast by the `1850s and was later introduced to California as an ornamental. It is currently found from Maine to Alabama, and from California north to British Columbia. Scotch broom likes full sunlight and dry sandy soil but tolerates less. It is aggressive and invades dry hillsides, pastures, forest clearing, dry scrublands, dry riverbeds, dunes, swamps, marshes, bog margins, and waterways. Its success is due to prolific seed production, long viability of seeds, green stems that allow photosynthesis all year around, and the nitrogen-fixing bacteria in its roots that enrich nutrient poor soils. As the plants enrich the soil they produce conditions that favor other non-native weeds that join scotch broom in overwhelming native plants. In addition, scotch broom is not palatable to wild life and its establishment may force animals to starve or go elsewhere. Photo Credit nps.gov

END_OF_DOCUMENT_TOKEN_TO_BE_REPLACED

Also known as Caspian manna and Persian manna plant, this deciduous shrub is indigenous to temperate and tropical Eurasia and the Middle East where it grows in both wetlands and deserts.  It is a member of the pea family, Fabaceae, that also includes beans, mimosa, and black locust.  The low scrubby plant grows up to 6.7′ tall and has an extensive creeping root system and many much- branched stems with thin hairy twigs and an abundance of  long,  slender, axillary spines.  The gray-green leaves are wedge-shaped, hairless, and 1/4 inch long.  In summer, axillary racemes of pink to maroon pea-like flowers appear and give way to half moon-shaped, brown or reddish pods with constrictions between the mottled brown seeds.  During the warm part of the day the stems and leaves produce a sweet gummy exude that hardens on contact with air and may be collected and eaten.  Camel thorn has been valued as a folk medicine and is consumed as a famine food.  It is unpalatable to animals and considered an invasive weed in some areas, especially grazing land.  The genus name, Alhagi, is derived from the Arabic word meaning pilgrim.  The specific epithet, maurorum, is the Latin word meaning of the Moors. END_OF_DOCUMENT_TOKEN_TO_BE_REPLACED

If you like to dig in the soil for treasures, grow pignut, dig up the tubers, cook them and enjoy a delicious treat that has a sweet taste something like chestnuts but with a hot after-taste like a radish. The tuberous root that gives the plant its name give rise to a hollow stem up to 3′ tall bearing dark green, deeply divided leaves. Small white flowers are carried in branched umbels in early to mid summer. Although the white flowers are pretty and the tuber edible, the plant is considered a weed in Europe where it is native.