Lantana camara is a perennial evergreen shrub native to tropical Central and South America but has been planted as an ornamental for its very attractive flowers. It spread to Europe, Asia, Africa, Australia, New Zealand, and Oceania and has naturalized and become invasive in frost free areas of the world including southern Florida, the Gulf Coast and southern California. It can form dense thickets, is toxic to livestock, and produces toxins that inhibit the growth of nearby plants. With its tolerance of very variable growing conditions and extremely high reproductive capacity by seed, this plant is a threat to agriculture as well as biodiversity. USDA Hardiness zones 10-11 END_OF_DOCUMENT_TOKEN_TO_BE_REPLACED

Rosa gallica is native to southern an central Europe eastward toward Turkey and the Caucasus and was first domesticated by the ancient Greeks and Romans. Most modern roses can trace their ancestry back to this rose and some varieties/cultivars are well known and still popular like ‘ Apothecary’s Rose’ and ‘Rosa mundi’ .  The species is a small thicket forming plant up to 1.6′ tall  and has straight slender prickles and pinnately compound leaves with tree to seven bluish-green leaflets.  The  fragrant pink flowers appear in clusters of 1-4 and each flower has five or more petals.  Flowering occurs only once during the season.  The globose to ovoid hips are about 1/2″ in diameter and orange to brown. Many cultivars are availbe that tend to be 3-4″ tall and have  END_OF_DOCUMENT_TOKEN_TO_BE_REPLACED 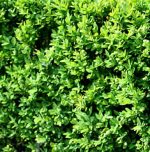 Box is a slowgrowing evergreen shrub or small tree with small leaves and clusters of small yellow-green, apetalous male and female flowers in the leaf axils of the same plant.  The fruit is a capsule containing several small seeds.  The most familar box in American is English box (B. sempervirens) that grows up to 30′ but is ususally kept smaller.  The most likely species of box growing in the bible lands, however, is B. longifolia, a 2-3′ tall shrub.  The identity of the plant mentioned in the Bible is controversial and some translators do not think any kind of box is indicated and suggest entirely different trees like cedar. END_OF_DOCUMENT_TOKEN_TO_BE_REPLACED

Although mead is not considered a wine it is an alcoholic beverage made by fermenting honey with possible additions of fruit, spices. grains or hops.  It dates back to 7000 BC in northern China but is also been found in Europe and Africa.   My paternal grandmother, Helen S. Wright included 4 recipes for mead in her book Old Time Recipes for Home Made Wines puablished in 1909.  This one has one fruit and more spices  than the others but does not contain grains or hops.  Grandmother did not include and comments with the recipe so there is no way of knowing exactly what she meant by calling it “strong mead” but a hint may be given when she describes the amount of honey to use..   END_OF_DOCUMENT_TOKEN_TO_BE_REPLACED 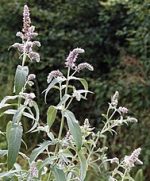 Also called wild mint, this herbaceous perennial is native to moist and wet habitats of Europe,  western and central Asia, and southern and northern parts of Africa. Plants  rapidly grow with a creeping rhizome to form colonies and have erect creeping  stems that are square in cross section and 16-47″ tall.  The strongly aromatic leave are stalkless,  2-4″ long,  and oblong-elliptical to lanceolae.  They are  green to grayish green on top with white undersides and have sparsely toothed edges.  In mid to late summer terminal  spikes of small  white to lilac or purple flowers appear.  The spikes are branched, dense, and tapered.  Horsemint is probably the mint mentioned in the Bible and is a tradtitional medicinal herb so deserves a place in the herb and Bible garden although its growth may need to be restricted.   Mint is a member of the deadnettle family, Laminaceae, that also includes basil, sage, and beebalm.   The genus name, Mentha, comes from the ancient Greek word μίνθη that honors Minthe, a nymph who was transformed into a mint plant.  The specific epithet, longifolia, comes from the ancient Latin words longum meaning long and folium meaning leaf. END_OF_DOCUMENT_TOKEN_TO_BE_REPLACED

Amur honeysuckle is a deciduous shrub and a member of the honeysuckle family, Caprifoliaceae, that also includes snowberry, weigelia, and abelia.  It is native to eastern and central Asia but was introduced into the US and used for hedges and to control erosion but escaped from cultivation and  naturalized in the woodlands of the eastern  part of the country, spreading to the Midwest. Plants prefer full sun to partial shade and moist soil but tolerate full shade and dry soil, and can be found in deciduous woodlands, woodland edges ,savannahs, and disturbed areas such as roadsides, fence rows and garden edges. END_OF_DOCUMENT_TOKEN_TO_BE_REPLACED

The domestic apple is a deciduous tree native to central Asia and has been grown for thousands of years in Asia and Europe.  It is a member of the rose family Rosaceae, that also includes almond, cherry and lady’s mantle.  The trees grow 6-15′ tall in cultivation and up to 30′ tall in the wild but many cultivars are grafted on dwarfing root stock and remain small.  The trees are well branched and have smooth gray bark with raised lenticels.  The dark green, elliptical to ovate leaves are 3-6″ long, have raised veins on their underside, and may be softly hairy.  Cymes of 4-6 white flowers tinged with pink appear in the spring.    Each flower is saucer-shaped,  1-3″ across, and has 4-5 petals.  The central flower of the cyme,the “king bloom” opens first and may develop a larger fruit.  The flowers and fruits attract wildlife and the fruits are especially valued all over the world for human consumption.  The fruits vary in color, texture, taste and culinary use.  The genus name, Malus, is the Latin name for the plant.  The specific epithet, domestica, comes from the Latin word domus meaning home, and refers to the fact it is cultivated. END_OF_DOCUMENT_TOKEN_TO_BE_REPLACED

Also called herb of grace, rue is an evergreen mounding subshrub native to the Balkan Peninsula where it grows on dry hillsides, often on limestone.  The ancient Greeks used rue to stimulate the uterus and nervous system, and the Romans used it to improve eyesight. Growing up to 3’ tall, the plant has a woody base and blue-green pinnately compound leaves 3-5” long with oblong to spatulate leaftlets. The leaflets are fleshy, dotted with glands, and are very aromatic when crushed.   The dull yellow flowers have 4-5 petals, are ¾” across, and appear in flattened corymbs in early summer. Plants are usually grown for the attractive foliage and are popular in herb and rose gardens.

END_OF_DOCUMENT_TOKEN_TO_BE_REPLACED

Also known as Scotch bonnet, fairy ring champignon are well known in Europe and North America where they appear in rings, troops, or arcs from late spring to fall in grassy areas such as fields, meadows, pastures, and lawns. There other edible and poisonous mushrooms that also grow in fairy rings so the common name, fairy ring champignon, is misleading. The fairy ring champignon is 1 ½ to 3 ¼ inches tall with a cap ¾ to 2 ½ inches across. The cap is pale leather brown when dry, and tan when wet. It is bell-shaped to conical at first but becomes flat with a large central umbo and undulating margin that is sometimes irregular. The cream to pale leather-brown gills are widely spaced and almost free on the stem. The long slender stem is tough, fibrous, and cream to leather brown. The spores are white. END_OF_DOCUMENT_TOKEN_TO_BE_REPLACED

Also called nard, nardin and muskroot, this  aromatic herbaceous perennial is native to the montane and subalpine zones of the Himalayas  where it grows on steep, grassy slopes.    Growing 4-20″ the plants have  a taproot  with  30-50 brown tapered rhizomes that are covered with the petioles old withered leaves and appear hairy.  A lightly hairy stem has 6-8  basal leaves that are slightly hairy and 6-8″ long,  and cauline leaves that are opposite, oblong to subovate, and up to 3/4″ long.  In early to mid summer, depending on elevation,  3-7 condensed cymes  appear bearing 40-50 bell-shaped, pinkish red to bluish white flowers.  The fruit that ripens in the fall is covered with short hairs.  Spikanard is valued for the highly aromatic amber-colored oil that is distilled from the rhizome.  The oil was very expensive and often mixed with other cheaper oils.  It was  is used as a perfume, incense, sedative, and folk medicine.   Spikenard is a member of the valerian family, Caprifoliaceae, that also includes honeysuckle, Abelia, and Weigelia. The genus name, Nardostachys, comes from Latin nardus,  Greek νάρδος, possibly referring to the ancient Assyrian city Naarda, and the Latin word spica, meaning spike, referring to the inflorescence of the plant.  The specific epithet,  jatamansi, is a Sanskrit word and refers to the hairy appearance of the rhizome.   END_OF_DOCUMENT_TOKEN_TO_BE_REPLACED